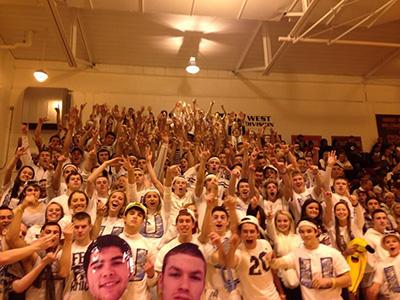 The Underground (The U) is taking it’s first steps of planning a big event for an away game. Normally, The U only does events for playoff games or general admission, but at the varsity boys’ basketball game taking place at Hersey on Dec. 6, The U has planned The Underground Road Trip.

For the event, The Underground is meeting at 5:45 p.m. in the commons at Prospect to send off the team. According to faculty sponsor of The U Frank Mirandola, there will also be free pizza, and the first 200 people there will receive a raffle ticket to get a free shirt once they arrive at Hersey.

The only challenge Mirandola sees is getting students from Prospect to Hersey safely, because students must find their owntransportation there.

The idea of having a huge event at an away game has been being developed by the students that have been running The Underground all year.

“We [haven’t played] a home game for quite some time, so we wanted to get people interested in the basketball season early,” Mirandola said.

Normally, The Underground would have a big “pack the place” event at Prospect this weekend, but according to freshman coach Jay Heilman the first home game won’t be for two weeks, so this is an alternative to getting people excited for basketball.

“[The U is] just trying to start off the MSL basketball season with a bang,” Mirandola said.