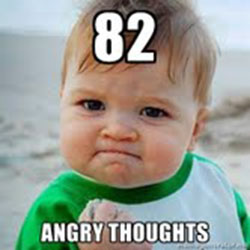 Ask any English teacher and they’ll tell you that teenagers have bad vocabularies. Not only bad, but lazy.

Especially when it comes to insulting one another (a pastime enjoyed by nerds, jocks, burnouts and preppies alike), teenagers are remarkably uncreative. Sure, sometimes someone will string together a series of vulgarities that seems new, but when it comes to talking shit, we work with a very slim lexicon. This shows itself through an overuse of certain insults that one hears so often that they lose their shock value and become nothing more than background noise.

The issue that arises when certain obscenities are used over and over ad infinitum is that they lose their efficacy. When I call someone out for being an idiot, I want it to hurt, or at least make a point. This is unfortunately no longer the effect that is achieved. Unless you’re willing to spend some time putting together a well thought out and original diss, you need to resign yourself to the fact that it’s pretty hard to get through to someone when they deserve it.

One of the words that comes up time and time again when teenagers are insulting each other (or anything else for that matter) is “gay”. Nary a day goes by that I don’t hear cries of “That’s so gay” “Dude, that’s so gay” or “You’re gay!” ring throughout the halls. Unless this is an incredibly ill-advised publicity technique for the gay-straight alliance, it stands to reason that teenagers, for one reason or another, still see the wo

rd gay as an acceptable and useful insult.

When you get right into it, however, “gay” is actually a pretty weak insult. Really all you’re doing when you call something out for being gay (when it isn’t) is demonstrating one of two things. Either you’re so closed-minded that anything outside the norm is open for mockery or you’re so obsessed with questions of sexuality that the word “gay” is never far from the tip of your tongue. Given that high school tends to be a time of exploration and rampant hormones, and that we live in a relatively tolerant community, it stands to reason that the latter is true most of the time.

If someone is so obsessed with homosexuality that they’re always thinking about the word gay, the main questions that are raised are not flattering to that person. In simplest terms, when you get right into it, using the word gay as a catch-all insult is pretty frickin gay.