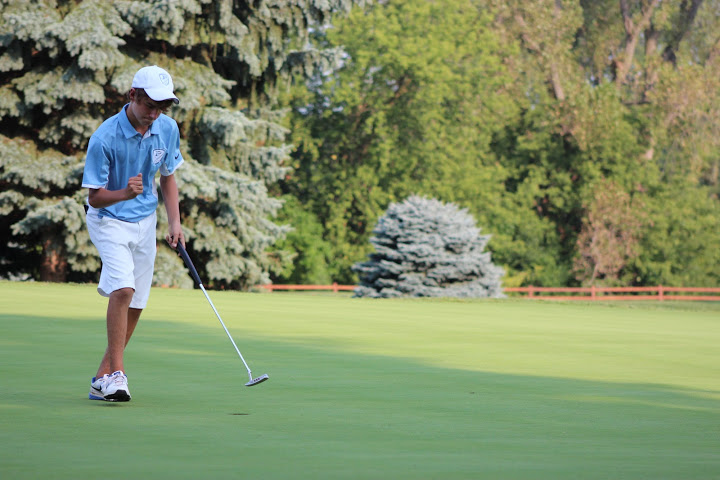 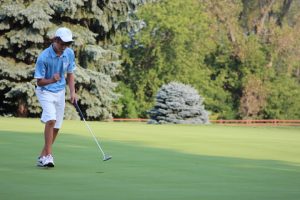 PAR-FECT: Junior Nick Tenuta sinks a putt for his team during a meet on Sept. 2. Tenuta placed 16th in conference this past Tuesday Sept. 29 and helped lead the Knights to a 3rd place conference finish. “We’re just so excited to start the postseason,” Tenuta said. (photo by Lauren Miller)

Heading into the varsity boys’ golf conference meet Tuesday Sept. 29, the conditions at Makray memorial golf course in Barrington were not ideal for the golfers. With a brisk northeast wind that arrived along with a cold front, temperatures in the 60’s and rain would shadow the home course of Barrington high school.

With the weather the way it was, the Knights managed to take home third place in conference behind Barrington and tied for first in the Mid-Suburban League east with Rolling Meadows.

Barrington’s very own Wisconsin bound junior Thomas Calbi shot a best score of 72 placing first by six strokes as the defending state-finalist Broncos with four returners capture the MSL crown by over 20 strokes.

Even junior Nick Tenuta had his fight with the elements as he bounced back from a double bogey on the back nine holes and still finished 16th with All-Conference honors.

“[Tenuta] is a very experienced player now,” Head coach Tom Martindale said. “That [was] done—he was ready to move on.”

On the girls’ side of conference play at Fox Run golf course the Knights placed third as a team as freshman Emily Fleming took home 10th place.

The boys’ golf team looks to advance in the IHSA playoffs as they compete at regionals next Tuesday Oct. 6 at Old Orchard golf course.

Tenuta and his teammates are very excited heading into the playoffs.

“We’re a unique group of guys,” Tenuta said. “We all play different sports and we all come together for one season of golf.”