In memoriam: ‘that’s so gay’

Dearly beloved, we are gathered here today to celebrate a dear friend who is gone too soon. “That’s so gay” has been part of our lives, our vocabulary and our social commentary since we entered the deepest depths of middle school hell. Now, as we finish our last months of high school, we must solemnly acknowledge its death.

I’ll never forget the moment I realized “that’s so gay” was gone. I was flipping through TV channels, looking for some excuse not to do my homework, when I saw “Interview With the Vampire” playing twice in a row. Perplexed that one showing wasn’t enough for the 1994 classic, I asked my mom why they were playing “the gayest vampire movie of all time” twice in a row.

That move made me a villain — after all, how could I, of all people, call a movie about two grown men raising a child and staring longingly into each other’s eyes even vaguely homosexual? My legitimate use of the phrase incurred anger from even my conservative mother. It doesn’t get much deader than that.

Groups like NoH8 and events like Day of Silence worked around the clock to strike the phrase — along with homophobic stigma — from our vocabulary. The Think Before You Speak campaign even ran ads on prime-time television back in good old 2008.

On a smaller scale, I did the same, performing the civic duty of using my bitch face on kids who yelled “that’s so gay” on the stairwell and giving speeches in art class. (Remember, kids, I’m gay; your painting isn’t.) And then without me even realizing it, it became unnecessary. Somewhere along the line, “gay” stopped being the adjective of choice for bad pizza and sports you don’t like, at least in the average social circle.

Now that I know that “that’s so gay” is dead and gone, however, I feel like I’m searching for an old friend. Political correctness didn’t just kill the homophobic sentiment that made those three words toxic; the phrase itself is dead to everyone who remembers it was offensive without bothering to look back and remember what made it so. 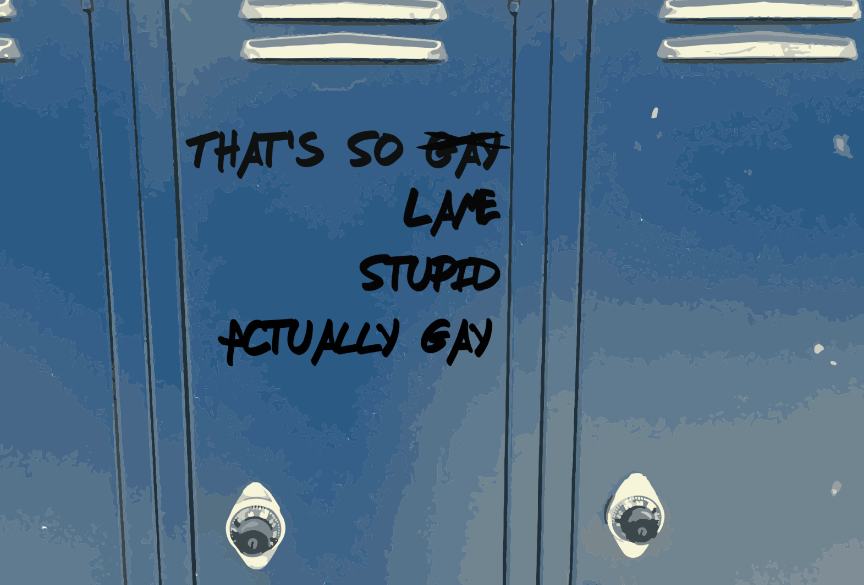 As a quick recap, here’s what was actually wrong with the phrase: we used it to describe things we didn’t like. By extension, it made “gay” a thing we didn’t like. That added to internalized homophobia suffered by closeted kids who had no measure of their peers’ acceptance besides the use of the phrase.

Here’s what wasn’t wrong with the phrase: the use of the word “gay” to describe anything that truly is. The word itself isn’t poison, just the context it was spoken in. It’s a word we definitely shouldn’t have buried when the phrase went down.

Yet, whenever I use it, I end up sounding like the homophobic one. When I call anything from Ru Paul to a rainbow flag to my good old self queer, I’m met with hushed responses and odd looks. Crumpled foreheads and raised eyebrows seem to ask me why I haven’t moved past such outdated, irresponsible word choice.

We sit on the side of the spectrum opposite from where we started, but it’s an extreme nonetheless, and it creates an ironically familiar effect: “gay” is now a hush-hush topic, so bad it can’t even be spoken of. At least, that’s the message all these tight lips send to the same closeted kids we were so worried about.

It’s time for “that’s so gay” to crawl out of its grave with a caveat not unrelated to the zombie imagery I’m using: use it with a side of brains.