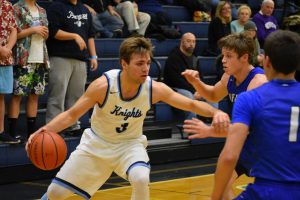 Senior Frankie Mack reads the defense in a game where he contributed 9 points and 2 rebounds. Over Christmas break, Mack was the second leading scorer in the Wheeling Hardwood Classic and was named to the All-Tournament team.

The Knights were locked in defensively from the tip. They led 9-7 after the first quarter, but it was only a matter of time until they started to hit shots. A 16-0 run in the second quarter left the Wildcats stunned, and the Knights didn’t look back.

“This whole game was about defense,” head coach John Camardella said. “[Assistant coach Brad] Rathe has been running through some stuff defensively. We have been holding teams to about 43 points lately, so we feel very good with where our defense is at, and we want to keep getting better.”

Coming into the game on Jan 6., it would be crucial for the Knights to stop the Wildcats’ two leading scorers, seniors TJ Best and Jalen Dennis. Senior Grant Zellmer drew the initial assignment on Best, and held him to only 4 points in the whole game.

A combination of players in senior Frankie Mack, junior David Swedura and senior Grant Whitebloom, to name a few, guarded Dennis and held him scoreless.

“Our on the ball defense was great tonight,” Camardella said. “Our defensive rotations were great, so those two things really made the difference.”

Offensively, Swedura led the Knights in scoring with 13 points on 5-7 shooting and added 2 rebounds and an assist as well. Scoring for the Knights was balanced as Mack added nine points, and senior Michael Ritchie eight.

The 50-26 win was capped off by a 30-6 run in the second and third quarters and gave the Knights some breathing room in the MSL East standings. Before the win, the Prospect, Wheeling, Hersey and Buffalo Grove were all tied atop the East at 2-1.

“This game is big,” Ritchie said. “ To start the new year off with a win, kind of show our dominance in the East and ride off of it.” 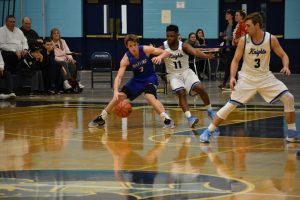 Senior Antonio Gardner guards Wheeling’s John Kappel tightly in the Knights 50-26 win on Jan 1. This was Gardner’s first game back for the Knights after suffering a foot injury earlier in the season.

The Knights got a key contributor back in this game with the return of senior Antonio Gardner, who started each of the Knights’ first six games before going down with a foot injury. Gardner scored 2 points, grabbed 1 rebound and played solid defense coming off the bench for the Knights.

“You could see his energy on the floor,” Camardella said. “Everything changes. He makes us a little bit more dynamic, he helps us make different changes in our offensive and defensive lineups that we like to play with.”

According to Ritchie, it was Gardner’s leadership qualities that made a difference in the game.

“It was really good [to get Gardner back in the lineup],” Ritchie said. “He’s a big leader on the court, both in his play and being a vocal leader.”

Looking ahead, the Knights have a huge matchup, according to Camardella, when the Conant Cougars come to the Jean Walker Fieldhouse on Tuesday, Jan. 10.

The Knights fell to the Cougars 74-63 on Nov. 21. This game will be a rematch of last year’s MSL Championship, a game in which the Cougars won as well.

“All eyes are on Conant,” Camardella said. “Everything is to Conant now. That game on Tuesday is huge, absolutely huge. Our guys are prepped for it — we have won 8 of 9 now, so we are moving in the right direction.”