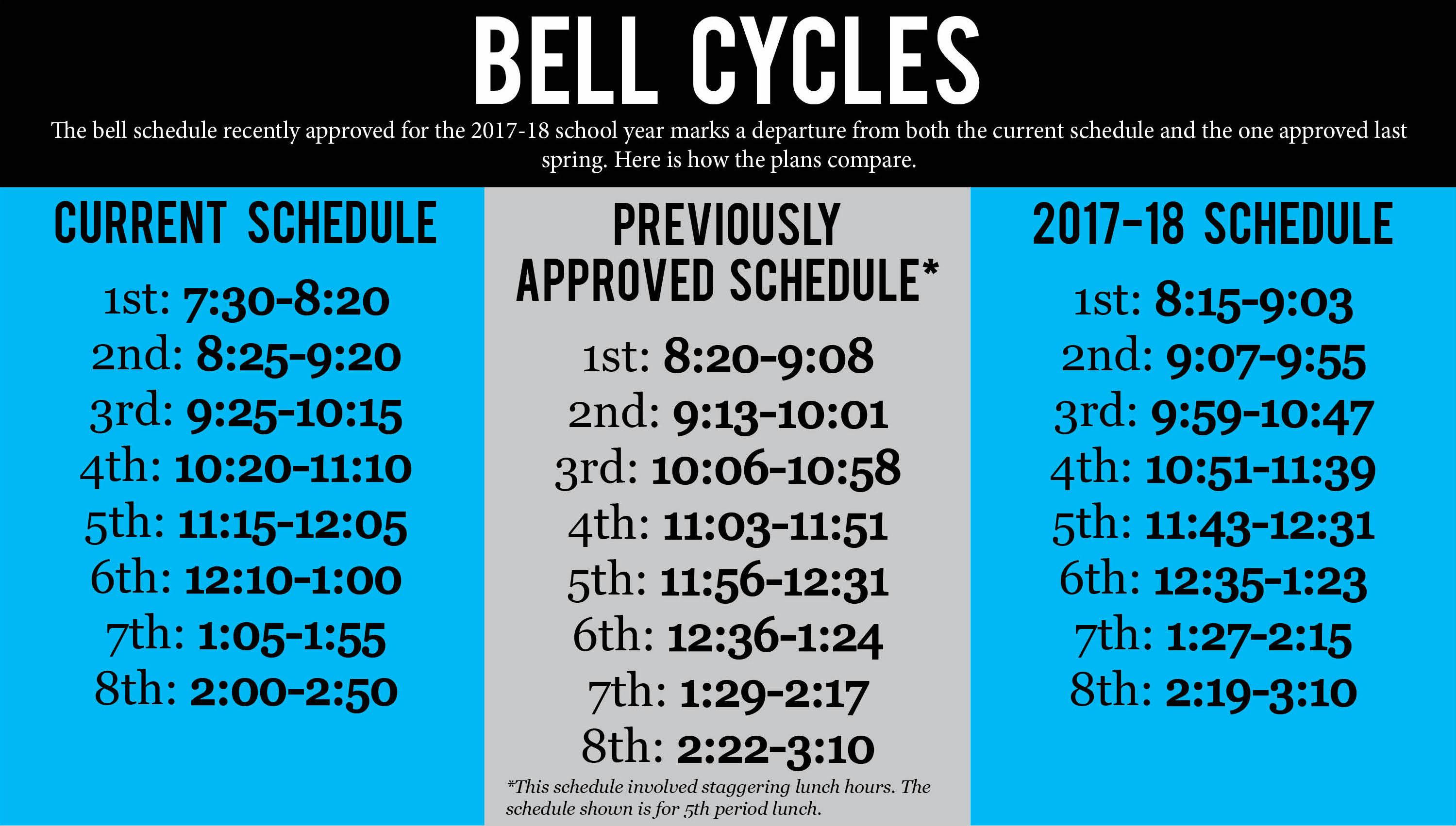 The Board of Education finalized changes to the bell schedule for the 2017-18 school year at their meeting Jan. 5. The school day will begin at 8:15 a.m. and end at 3:10 p.m. These changes were proposed by a designated Calendar Committee composed of District 214 teachers under the guidance of superintendent Dr. David Schuler. These modifications are in addition to moving finals before winter break and limiting extracurricular practice time.

A key difference between this schedule and the one proposed last June is that lunch periods will not be staggered to be shorter than other periods. According to English teacher and Calendar Committee representative Karen Kruse, the change was made because the committee had not previously considered available space. For instance, there would not be enough science labs if not all students switched classes at the same time during the middle of the day.

The Committee accommodated this problem by taking time from other periods of the day like the passing periods, which will now be four minutes. Other notable aspects of the plan are that teachers will hold nearly identical hours, which means that students will need to seek additional help before class, and that school on Thursdays will now start at the same time as the other four days of the week.

Although the Calendar Committee will be meeting with coaches and activity sponsors in the spring to finalize extracurricular time restrictions, these announcements mark the the culmination of investigating academic changes that began in fall 2015. Kruse believes the thoroughness of these meetings has produced a strong schedule for next year.

“It’s good that it’s a long process because then we could work out as many bugs as we can before we implement it,” Kruse said. “Are there things that aren’t going to work out and we’re going to have to adjust again? That’s entirely possible, but that’s OK.”

One potential issue that Kruse has already heard feedback regarding is the placement of the announcements. The new schedule allots time for announcements during seventh period, which offers the benefit of reaching students who commute from classes at other schools in the morning. However, it also means that students will not hear information regarding that day’s lunchtime activities.

The Calendar Committee will continue to meet over the course of the two-year pilot program to confront this concern and any others that may arise. Schuler believes they are ready to handle these challenges.

“We’re just going to feel it out,” Schuler said in an interview last May. “We think it’s going to work, but we’re also going to be flexible and continue to study and adapt if necessary.”