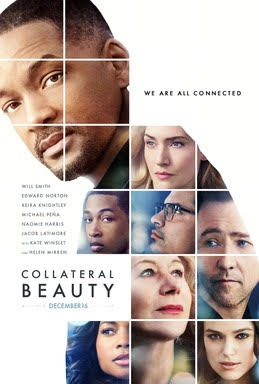 Is it possible to make people feel better by doing them harm? Many people do not think so, but director David Frankel and screenwriter Allan Loeb do. Their polished, elaborate, and elevated film, Collateral Beauty, answers that simple but difficult question.

Throughout this film, I constantly asked myself this question. This movie is not your typical Christmas love story that barely has a plot but people still see it since “everyone” needs a feel-good Christmas movie.

This movie opens with Howard (Will Smith) telling his advertising firm that advertising is not about selling or telling people things, but it’s about addressing people personally. At the end of this scene, before you start an emotional rollercoaster, Howard tells his employees that advertising is about tackling three abstract concerns everyone has: love, time and death.

“Love, time and death. These three things connect every single human being on earth. We long for love, we wish we had more time, and we fear death.”

When I watched this scene, I thought maybe I was wrong, this will be a sappy Christmas movie, but as the movie continued and the plot start to reveal itself I realized I was completely wrong.

This movie is about Howard’s partners, Whit (Edward Norton), Claire (Kate Winslet) and Simon (Michael Penã) trying to help Howard get “better” since they believe he is mentally unfit to make executive decisions for their advertising company after the death of his six year old daughter. Their plan is to hire actors to play Love, Time and Death and interact with Howard to make him seem insane.

At this very point in the film is where I and many other people questioned whether this plan is truly what’s best for Howard, his co-workers and company. Unlike many movies about love, this movie focuses on the individual and how one deals with pain on the inside, because to many people’s surprise, along with myself, Howard’s co-workers need the actors to play their role more than they think they do. Each actor not only tries to represent abstract ideas and feelings Howard felt failed him, but they represent Whit, Claire and Simon’s life as well.

Even though these connections can be seen from a mile away, this movie has the right to do that. What I think Frankel’s and Loeb’s idea for this movie was was to create a movie that focuses on something little holiday movies do, moving on and going through pain after a loss.
We have to remember this movie is centered around the death of a six year old girl and the harm Howard’s co-workers are causing him. With this in mind, Frankel and Loeb do a fantastic job of balancing the idea of that pain people will feel when they lose someone, but still having the urge to soldier on.