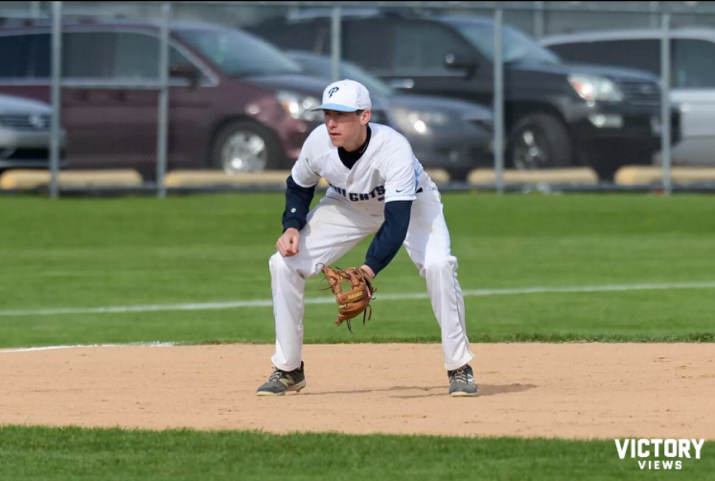 As the old saying goes in baseball, it all hurts after two outs. It really hurt for the Knights on Monday, as they lost 8-2 against Barrington in the MSL Championship Game.

Throughout the game, the Knights gave up seven runs with two outs and no runners on. Head coach Ross Giusti said the team just had no resolve in the game.

“Defensively we came up short, we didn’t make the big play when we had to and we let [Barrington] off the hook,” Giusti said. “They put together some big innings and you can’t overcome seven runs in those situations, you have to step up and make the routine plays.”

The Knights made four errors in the game, which was uncharacteristic for this year’s team. The team hadn’t played in a week, and Giusti felt it really affected Prospect.

“I really felt we were rusty,” Giusti said. “I didn’t feel that we had any momentum coming into this game and usually in this situation you do.”

In the game because of all the errors, the Broncos had extra opportunities throughout the game. Giusti said the team needs to be able to move on from making errors and recover.

“When you give a team five or six outs in an inning, it just doesn’t works,” Giusti said. “Not only that, but [junior Ryan] Howe probably threw an extra 20 to 30 pitches because we didn’t get ourselves back in the dugout.”

The Knights had problems with striking out in the game, fanning 10 times as a team. Giusti said the team needs to have a better approach at the plate with two strikes.

“We had a two strike approach that we were out there swinging out of our shoes,” Giusti said. “In that situation … you have to at least put the ball in play.”

The Knights did have a chance in the 6th inning to climb back into the game with the bases loaded and nobody out. However, after two strikeouts, a bases loaded walk and a pop out to left field the team was not able to put together a rally.

The Knights’ goal is to be the last team standing from the MSL in the state playoffs according to Giusti. He believes the team will be ready to go for regionals after their loss in the MSL Championship Game.

“These kids are resilient, they’ll bounce back,” Giusti said. “I’m very confident Thursday we’ll come out and play a good game. We have [senior] Ben Courtney, our number one, back on the mound and I know he’s going to give us everything he’s got.”