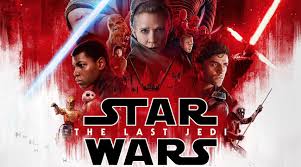 Jerking your chain in an underused and underappreciated expression these days.  It comes from the analogy of a dog on a chain, with its owner using the chain to fling it around back and forth. It’s a bit of a graphic analogy for a simple expression, but nonetheless, the expression still stands.  And that’s exactly what Star Wars newest installment does.

Star Wars VIII: The Last Jedi has been receiving many great reviews from critics and fans alike.  It centers on Rey, a young Jedi who has finally found Luke on his island of seclusion and asks him to return with her to fight the dreadful New Order, only to be surprised and dismayed to find that he wants nothing to do with the outside world anymore and is merely waiting on his island to die a failure.

Meanwhile, with the rest of the rebellion, Commander Poe and Finn, the former storm trooper, team up with a new girl, Rose, to try to stop the New Order from following them at lightspeed and destroying what is left of the rebellion.

Now, I’m not a hardcore Star Wars fan, and I admit that. I like the movies, but I haven’t seen them more than once, and I just enjoy the story when it comes around.  Needless to say, I walked into the movie theatre with not the highest of hopes for a deep plot but more wanting to be entertained.  My hopes were apparently higher than I thought.

There were some things this movie did right: good CGI in the fight scenes, sacrifices that meant something and some well-done reunions between characters we weren’t expecting to see together.  The fights were entertaining, and there was some well placed humor.  However, that didn’t really outshine the negative, so my opinion is very mixed.

Throughout the movie, Kylo Ren, Han Solo and Leia’s son, shows some doubts about the side he has chosen.  But the fight almost seemed listless.  Is he good or is he bad? Oh, great, he’s good! Oh, wait…never mind.  It went back and forth so much throughout the movie, to where I felt like shouting at the screen, “We get it, he has inner turmoil. You can’t do both, movie! He’s either good or bad! Pick one!”

There also is a bubble of believability when you watch these types of movies, and when that bubble is popped, it’s hard to really get attached to characters and feel actual tension.  For example, you can’t send ten pilots out in shuttles to fight an impossible force and have three survive against all other odds only to have those three survivors be your three main characters that you sent up in pods.  All of the sudden, there’s no fear anymore, no more reason to root for these guys if they’ll just always survive anyway.

This movie took that road more than once.  The characters made a big deal about starting out with a small group of rebels willing to fight to the death, but so many died that it was difficult to believe there were any people left, much less the number of main characters that lived.

The humor in this one also often seemed forced.  In The Force Awakens, the humor flowed effortlessly, fitting nicely in with the rest of the action and always fitting the characters that used it.  This movie felt a little more like an explosion, then “insert obligatory joke here” before going straight into another explosion.  They did add some new interesting creatures that added humor though, and those bits were well done.

Finally, and this is the biggest part of the movie that made me leave dissatisfied, the movie seemed pointless.  Many actions were done throughout the movie that had no meaning to them, that didn’t help anyone or anything help the rebels get anywhere closer to their goal.   You don’t want to leave a movie feeling like everything you just saw was utterly pointless.  I kept thinking the movie was going to end every five minutes during the last half hour, and I kept thinking that it should.

Now, there were some fantastic moments, done by the actors, through CGI, and just plain intelligence on the writers’ part.  There was quite a lot of action and fighting so that the movie was very entertaining and kept you on the edge of your seat.

There was also the constant can-do attitude that we’ve come to love about our rebels, and they are often willing to do whatever it takes to win, but to win for the right reasons.  There were moments that I couldn’t help but smile as a new character decided to step up and do what was right when times were hard.  That is what these movies are about.

On the other hand, these days, movies often focus so much on the special effects and playing with the audience’s emotions that something else is just missing.  There was so much action that the characters seemed bland and almost unlikable to some degree. The writers wanted the audience to feel things, so they continued writing scenes to tug at your heartstrings and to make you tense up for what happens next.

The journey is important, just like feelings and action are, but so is the destination.  You need to come up with a set beginning and a set ending and just tell the story. If you can manage that, the other parts will naturally happen on their own.