What we get wrong about college admissions

The season for exploring the next steps after high school is kicking into high gear for juniors. With the recent college admissions scandals and the Harvard lawsuit, the strategy of how to get into a dream school is becoming less clear.

Wealthy parents, such as celebrities Lori Loughlin and Felicity Huffman, have been accused of paying hundreds of thousands of dollars to big name universities, like Yale, as a bribe for their children to get accepted.

At the same time, another elite school became entangled with the courts in a case aiming to eliminate their affirmative action programs in the Students for Fair Admissions v. Harvard case. In this lawsuit, Harvard has been accused of allowing implicit bias to infiltrate the admissions process after many Asian Americans have felt that they got rejected because of their race.

The admissions process is very complicated and there are flaws throughout the system. It’s gotten to a point that it seems like the best thing that I can do as a student is to follow my interests and hope that’s enough.

But most people don’t think like this. Many seem to change themselves on paper or change themselves as a person in order to look good on their transcripts. Students will enroll in classes or extracurriculars that don’t truly interest them just for the sake of making their college application be more appealing.

Some even play up their race on paper for a better chance at getting into their dream school to make them stand out.

For example, I’m half Asian and half white and my dad tells me to solely fill out the “Asian” bubble to reap the benefits of affirmative action, as schools want to admit minority students to add diversity to the student body.

While other people tell me to only check off “white” because competition for spots among Asians is seemingly more competitive. Since this is the case against Harvard: that the university only accepts a set number of Asians, limiting them so that there are enough spaces for people of other races.

I don’t ever end up filling out just one since I am one race just as much as the other, the thought of using my race to my advantage on a standardized test never fails to cross my mind every time I start filling in the answer sheet.

So this isn’t surprising to me because there are very few variables in my life that I seem to be able to control. The factors I really can change are limited to my grades, test scores and my extracurriculars.

At the beginning of this year, my freshman year, I joined Science Olympiad, Math Team, Service Club, Sewing Club and tech crew solely for the sake of making my college application look better, even though I personally have little interest in competitions of math or science.

Just focusing on the sheer amounts of honors classes,  AP classes and extracurriculars was getting stressful because along those lines alone, it was easier for me to compare myself to others.

This type of stress isn’t worth it because it’s not a guarantee that if I do these activities, take these classes, get this score on tests, that I’ll get into an elite college.

There are no guarantees in the admissions process for the highly selective school.

Junior Gerard Pena plans to apply to Washington University in St. Louis, among other elite colleges. He recently visited Harvard and heard from numerous people that a lot of getting accepted is a matter of luck.

“Sometimes it doesn’t matter if you’re a really involved or smart student,” Pena said. “Sometimes… they can only take [so many students]. It’s not because you had a shortcoming. It’s just because that’s how it works.”

Over 42,000 people applied to Harvard to join their class of 2022. Only 2,024 people were admitted according to Harvard admissions statistics.

College Counselor Diane Bourn has seen many seniors walk into her office after getting rejected by their dream college just to be accepted by a college without such a prestigious name. Those disappointed seniors dropped their heads and said “but I took more AP classes than I needed to, and I still would have gotten into this school even if I enjoyed high school a little more.”

Bourn’s advice is to tell underclassmen that even if they follow this path, there are no promises of getting in.

“You’re setting yourself up for four years of being on the little hamster wheel trying to do everything right,” Bourn said.

It’s not difficult to burn out on this path because you are putting yourself to this standard that in some ways, doesn’t really exist. Schools are starting to look away from SAT and ACT scores, making them optional. The University of Chicago paved the way in 2018 as the first elite college to make the ACT and SAT tests optional for applicants.

“A number on a paper does not define you,” Pena said.

Getting the highest score on the SAT doesn’t guarantee a ticket into an elite college either. According to Niche.com, a website used to rank and compare admissions data among applicants, many people with higher SAT scores were rejected while people with lower scores got accepted.

Standardized tests are still used because they offer an easier way to compare students’ academics among thousands of applications, but it isn’t the only factor that’s looked at. Schools want diversity in a student body whether that comes down to race, activities, or experiences.

“There’s too much emphasis on that prescribed way of getting into a college,” Bourn said.

A newer system of admitting students is called holistic review. Instead of looking at just test scores and GPA, it includes the scanning of personal attributes, experiences and demographics.

Bourn advises to take classes and get involved in activities that interest and challenge you, not just activities that will look good to colleges. Following the latter option forces more stress, as it did for me.

“Why do students keep putting themselves through this when it’s not a guarantee of getting that golden prize at the end, [which] is getting into that highly selective school that they wanted?” Bourn said.

Pena understands that even if he gets rejected by his dream school, he won’t feel resentment because he knows of his accomplishments and his ambition, which I believe is the right way to look at it.

When you’re so focused on that one end goal of a specific college, it’s easier to lose sight of other things that you should be learning in school like relationships or your own mental health.

High school is a time to grow yourself and develop who you are. That isn’t something any piece of paper can tell you. 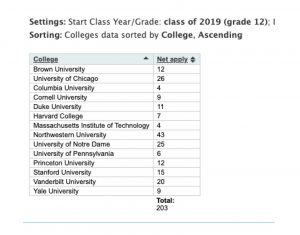