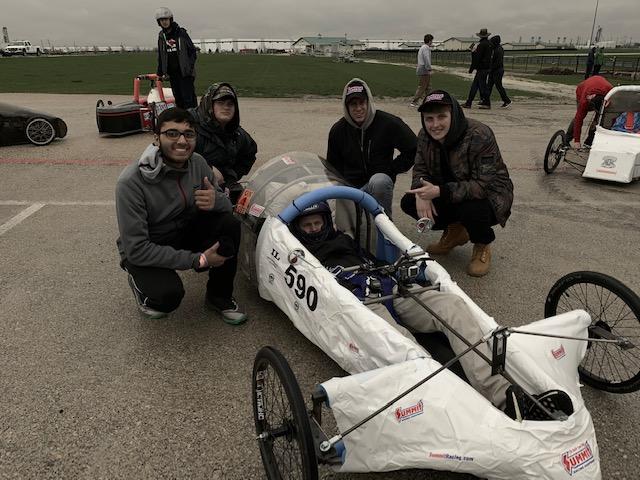 Five students — two from Independent Study, two from the Advanced Automotive Class and one volunteer — competed in the Challenge U.S.A. automotive competition on April 28 and 29 in Joliet. According to Technology Education teacher Tim Schaap, District 214 only competes in one out of five or six Challenge U.S.A. competitions held in the surrounding states. Schaap notes that some other schools go to and heavily invest in preparing for every competition.

Schaap says Prospect did extremely well, as at one point the team calculated 371 miles to the gallon — In contrast to the 30 to 120 miles per gallon range for an average car in the U.S. according to Fueleconomy.gov. However, Schaap says that he did not stress doing well in the competition, as his main objective was to teach his kids the rules of an automotive competition, as well as just successfully put a vehicle on the track. He also notes the group’s impressive dedication in building the vehicle.

He specifically recalls, however, that other teams’ vehicles were breaking down and in the pits as they scrambled to fix them.

“We brought a vehicle to the track and started it up, and it just ran and ran and ran every time we needed it,” Schaap said.

According to Schaap, the competition consisted of a two lap drive (one lap around the track being just over two miles) while constantly testing the ratio between a live engine, speed and coasting. Meaning, in order to conserve fuel, students had to find the perfect ratio of running the engine, hitting the gas until reaching the optimal speed and then cutting the engine to coast.

According to Scherrick, although he hated actually working on the vehicle, he loved to see it run during the actual competition. Correspondingly, his best memory of working with the vehicle, apart from the competition, was pushing it around the field house to test the steering system.

Schaap still maintains that their goal as a program is not to place, but instead to learn how to compete and successfully put forth their creation.