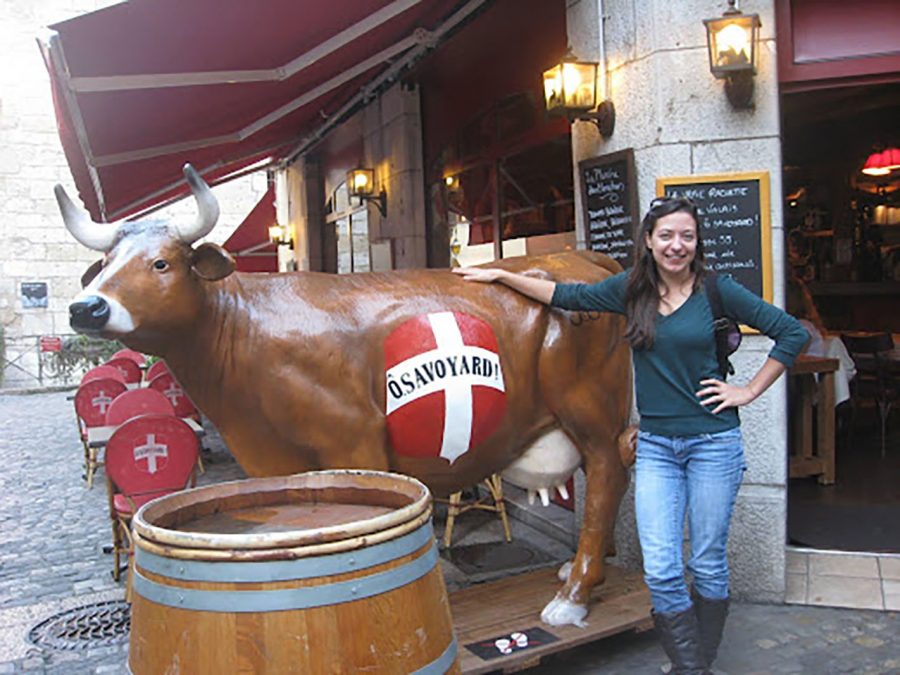 Ashley Brown, new French teacher, still remembers the first time that she saw the Eiffel Tower while walking down the street in Paris, where, at first, she was only able to see part of it from behind a building. She had already been in the city for a few days, but had yet to see the tower because she had been too busy.

“I was kind of in awe at how big it really was, and it was just a really exciting moment for me,” Brown said.

This was her first time being in France, on a study abroad program in Paris, as a junior at DePaul University. Later in her life, she moved to Chambéry, a small town in the southeastern part of France, near Italy and Switzerland, to teach English.

This will be Brown’s first year teaching at Prospect, but she will be in her seventh year of teaching high school French. Brown teaches French One, French Two and Honors French Three classes.

She grew up in Illinois, attending Libertyville High School, and moved to Chicago while attending DePaul. After she graduated, she moved to New Mexico for her first teaching job.

While in New Mexico, Brown stopped teaching at the school she was originally at, but stayed there because she got accepted to a master’s degree program for French at the University of New Mexico.

Brown recently moved back to Illinois after living in Albuquerque, New Mexico for the last 11 years. She decided that it was the right time to move back because she has two kids, and her family still lives in Illinois.

Brown said she loved the French classes that she took in high school because of how different they were from her other classes, and how they made her want to travel and see the world.

She knew that if she became a French teacher, then she would have the opportunity to continue learning the language and get the chance to travel there, which is why she decided to pursue it as a career.

While on her study abroad program in Paris, she took classes in a few different places to help her learn the language, and stayed with a host family. Brown decided to stay in Paris to study abroad for the full school year.

The second time she moved to France, living in Chambéry to teach English, Brown had a much different experience from her first.

“In Paris, it’s a really big city,” Brown said. “It’s cosmopolitan, and there are really people from all over the world. And people think of Paris when they think of France.”

The aspect of France as a whole that Brown likes best is the culture. She said there are a lot of minor differences with French culture, in comparison to American culture, such as how people tend to treat mealtimes as a special time to connect with their roommates or family.

“They just have sort of an appreciation for food, which Americans don’t always have,” Brown said. “Like here, we might get something from McDonald’s, and eat it in the car in two minutes. In France, that just rarely happens. People always have to sit down and really enjoy that time.”

Brown would say the tendency to enjoy mealtimes translates into other aspects of life for the French people, as they have an appreciation for simpler things.

A lot of places, including major grocery stores are typically only open in the morning on Sundays in France because it is a day meant for relaxing, not going out and shopping.

Brown accredits the experiences she had while living with her host family and then with French roommates for her knowledge of the culture.

“I mean, as far as language, when you’re immersed in it every day, and, you know, your friends and everybody you talk to, you just get better at the language really fast.” Brown said.

Brown thinks her deeper understanding of French customs and lifestyle has helped her as a teacher of the language.

“You might read something in the textbook, or maybe somebody else will describe their experience with the culture, but to experience it firsthand is just a little bit different,” Brown said. “And you say, oh yeah, this really is how it is, or, you know, what I read is true, or maybe it’s different than what you thought it was gonna be like.”

Brown’s biggest goal for her students is to give them many opportunities to be able to communicate in French, which she knows is the hardest part of learning a language.

She hopes to bring her enthusiasm for French to PHS, and wants to get more involved.

Being back in Illinois, Brown forgot how humid it was, but she also said it is nice to be within a closer distance to her family and eat deep dish pizza again.