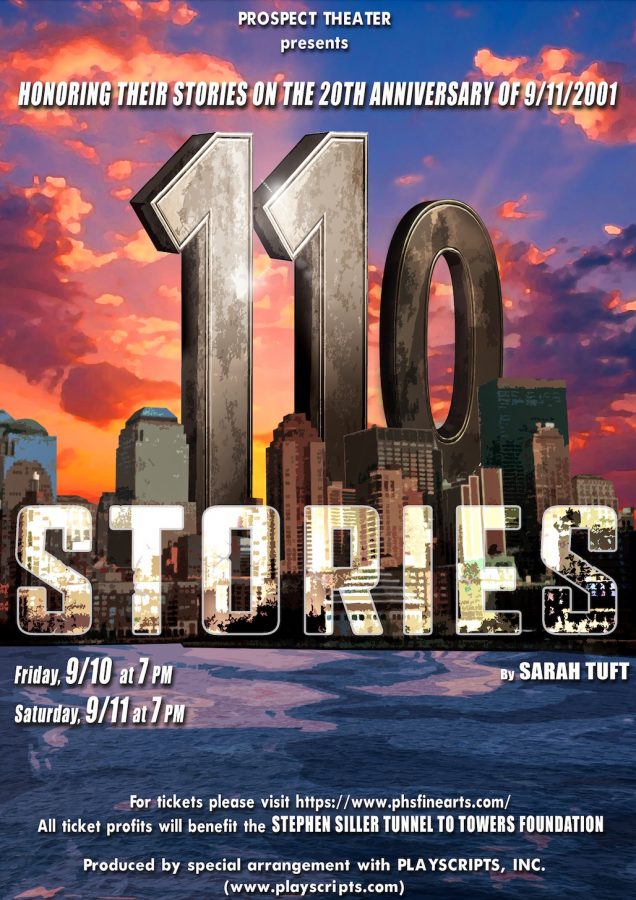 The observance of Sept. 11, Patriot Day, will hold a special meaning this year as the United States remembers the tragic events of 9/11 20 years after terrorists working for Al-Qaeda hijacked four commercial airline flights, crashing two into the World Trade Center in New York City and another into the Pentagon in Washington, D.C.

Prospect’s theater department will be honoring this anniversary with a production of “110 Stories” by Sarah Tuft, a show that serves to highlight the heroism and bravery of everyday people and first responders in the face of the panic caused by the attacks. The show, which will take place in Kulieke theater on Sept. 10 and 11 at seven p.m., is not a typical performance with set design and stage acting, said Fine Arts Director Jeremy Morton.

According to Morton, the show will be a form of verbatim theater, where spoken word is used exclusively to tell the story, which, in “110 Stories,” is constructed out of many different accounts of the day from interviews with people who were there to witness the attacks. The perspective will shift over a wide spectrum, ranging from first responders and volunteers to a group of homeless people living by the World Trade Center. The intent is to fully capture the feelings and emotions that everyday people experienced during such a prolific event.

“You see the good in people, you see the fear that people went through, and it’s just a … powerful, powerful piece that keeps these stories alive,” Morton said.

Although no Prospect students were alive yet in 2001 when the attacks occurred, there is another group in the PHS community that shares first-hand knowledge of what it was like on that day: the staff.

Morton sent out an email asking staff whether they would be interested in retelling their stories and memories of the day and sharing their varied experiences from 9/11 with the cast before the show.

Some staff members were still in school at the time, while others were in entirely different jobs; Morton himself will be sharing his memories of where he was and what he was doing as a first-year teacher in 2001. No matter what the experience, Morton hopes hearing these accounts will enhance the cast members’ understanding of the wide-reaching effects the attacks had.

“That’s really to enhance the actor’s perspective of, ‘Oh my god, these stories hit people that we know,’” Morton said. “ … And then it will help them hopefully connect to their stories that they’re going to be telling as well.”

One staff member who will be sharing his story is Assistant Principal Frank Mirandola, who was a student at Illinois Wesleyan University when the attacks occurred.

Mirandola also had the opportunity to discuss his experience with the day with the PMK before they visited the 9/11 memorial during their 2016 trip for the Macy’s Thanksgiving Day Parade in New York, and he was eager for Morton to portray such an important topic for the Prospect community. He believes learning more about the events from the perspective of the staff will help the actors better understand the roles they will be portraying.

“I think to understand the magnitude of the role, [we need to understand that] it’s not a play, but a reflection of history,” Mirandola said. “It’s not a drama, it’s the lives that we lived 20 years ago.”

10 staff members will also have roles in the show itself, with five acting in each night’s performance. All of the staff members who have volunteered to share their stories will do so in a private experience that is reserved mainly for the cast so as not to create any disruptions for the sensitive topics being discussed. The show itself will likewise feature a warning, Morton said, to make sure that the audience for the film will be mature enough to understand and respect the weight of the topics discussed.

All ticket profits made from the show will benefit the Stephen Siller Tunnel to Towers Foundation, an organization with the goal of aiding first responders and military personnel.

Even outside of the show’s profound message, Morton is hopeful that “110 Stories” will kick off what he believes will be an eventful year for the Prospect theater department.

“We created so much last year during the pandemic, but a lot of it was through screen, and so now we wanted to break that screen a little bit, and here we go,” Morton said.