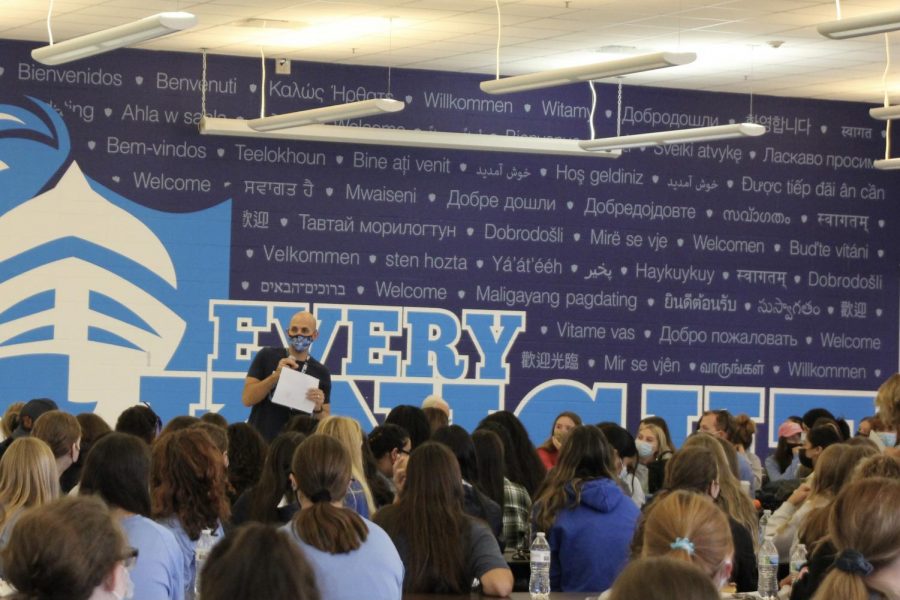 Looking Back on Prospect Gives Back

Cars whiz past junior Maggie McGarry as she bends down to pick up yet another discarded piece of trash — this time an empty McDonald’s cup.

McGarry and other members of the National Honors Society (NHS) and Marine Biology Club were tasked with picking up litter on Kensington road as part of the Prospect Gives Back event. Though perhaps not the most glamorous of activities, McGarry still enjoys serving the community this way.

“Doing service with our clubs … is a good way for us to not only be productive and get service hours done but to also [get involved] in service together,” McGarry said. “It just makes it a little more fun, and [it’s] an overall great bonding opportunity.”

McGarry is one of approximately 250 students that attended Prospect Gives Back this year on Saturday, Oct. 2. Prospect Gives Back is an annual event where students lend their services to the community for a morning at the beginning of October. Along with the 250 students, 25 teachers and over 20 clubs and organizations are also involved in this event.

“I just love seeing the energy that roll[s] around the idea of service,” Assistant Principal Frank Mirandola said. “It’s a joy to see so many smiley faces [and] high energy being put [into] the community.”

Although Prospect Gives Back has always had a positive impact on Prospect and the community, according to Mirandola, this year it is even more important than ever.

“We’ve been isolated for so long [that] we’ve kind of gotten used to the world through the lens of our bedrooms and our computer screens,” Mirandola said. “It’s really about getting back out into the community and rekindling those relationships that have been dormant … due to the world conditions.”

It’s relieving to Mirandola that despite the time Prospect students were away from the school because of the COVID-19 pandemic, they are still eager to give back to their community.

“It really says something that students want to be here at 7:45 on a Saturday [morning],” Mirandola said. “You [have to] remember [that] most kids don’t normally roll into school until 8:15 on a regular day so the fact that these students are making a special effort to be here and … serve is just really incredible.”

Senior Adele Vincent, who volunteered at First Methodist Church thinks giving up her morning is more than worth it. Vincent and other members of NHS took time to weed and partake in other gardening activities.

“[This event] is a really important opportunity … to help out some people that really need it,” Vincent said. “It feels really good [to] take a little bit of time out of my Saturday to just help the community.”

Both Vincent and McGarry are proud to be representing Prospect and think the event is a great opportunity for everyone to see what being a Prospect student really means.

According to Mirandola, not only is Prospect Gives Back a great way to show the character of Prospect students, but it is also a way to “reshape the narrative” of what being a teenager is all about.

“I think people give teenagers a bad rep, and it’s an unfair rep because of the small snapshots people choose to pay attention to the news,” Mirandola said. “But by [doing service], I think it kind of [changes that] narrative.”

Even though putting this event together took months of planning, communicating, and organizing, to Mirandola and the rest of the Prospect staff, it is more than worth it.

“It’s easy to perceive younger individuals as selfish, but I think this day is a perfect example of just how much selflessness is out there,” Mirandola said. “[Prospect Gives Back] really just celebrates that more than anything and allows our community to see it, too.”