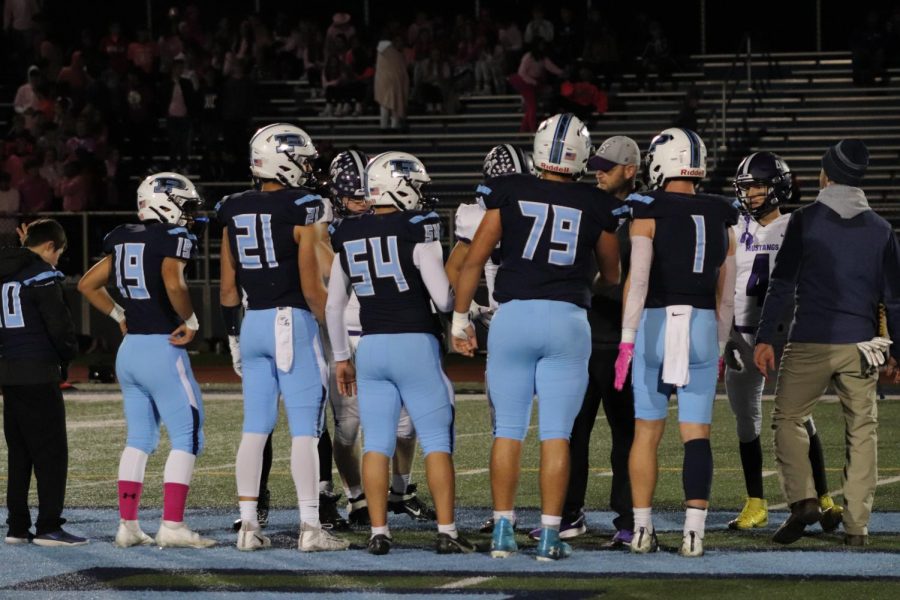 Knights Look to Bounce Back in Playoffs

With little time remaining in the fourth quarter, the Knights were attempting to complete their comeback against the Rolling Meadows Mustangs. After being down 26-10 at one point, the Knights fought it all the way back to 26-24 and the final play would be a heartbreaker for the Knights.

Junior Brad Vierneisel, who was playing quarterback in replace of an injured Frank Covey, threw a 50/50 ball up to wide receiver Rocco Falls. Both Falls and the Mustangs’ defensive back had the ball coming down and the ref ruled it an interception. The Knights’ comeback would fall just short.

“My biggest takeaway is you cannot take for granted the opportunity to play the sport that you love,” head coach Dan Deboeuf said. “And Unfortunately, I think for a half, I don’t think for the full game, but I think for the first half we got caught thinking about being conference champions and also thinking about the playoffs and [were] not totally focused on the task at hand. I think that once we turned it back on, it was too late.”

Vierneisel stepped up in a big situation and was key in helping fuel the almost comeback. Vierneisel finished with 149 yards passing and two passing touchdowns. He was able to find wide receiver Jake Parisi on many occasions as he finished with 168 yards receiving and two touchdown catches.

“Some of the bright spots you can take away was … the fight that the guys had to push it to the end of the game and guys like [Vierneisel] stepped right in and once he got comfortable he did some really nice things and made some nice plays,” Deboeuf said.

It is still unclear on who will start for the Knights in their first playoff game as according to Deboeuf, it is a game time decision.

The Knights finished the year 7-2 which landed them the 11th seed in the IHSA State Playoffs and they are going to take on the 22nd seeded Shepard.

“My view has changed a ton, playoffs and playoff seeds and who you’re playing,” Deboeuf said. “… anybody can beat anyone on any given day when it comes to playoffs. It’s not like anything else where it’s not a regular season game. When you truly know that your backs are against the wall, teams are capable of doing things that they weren’t before.