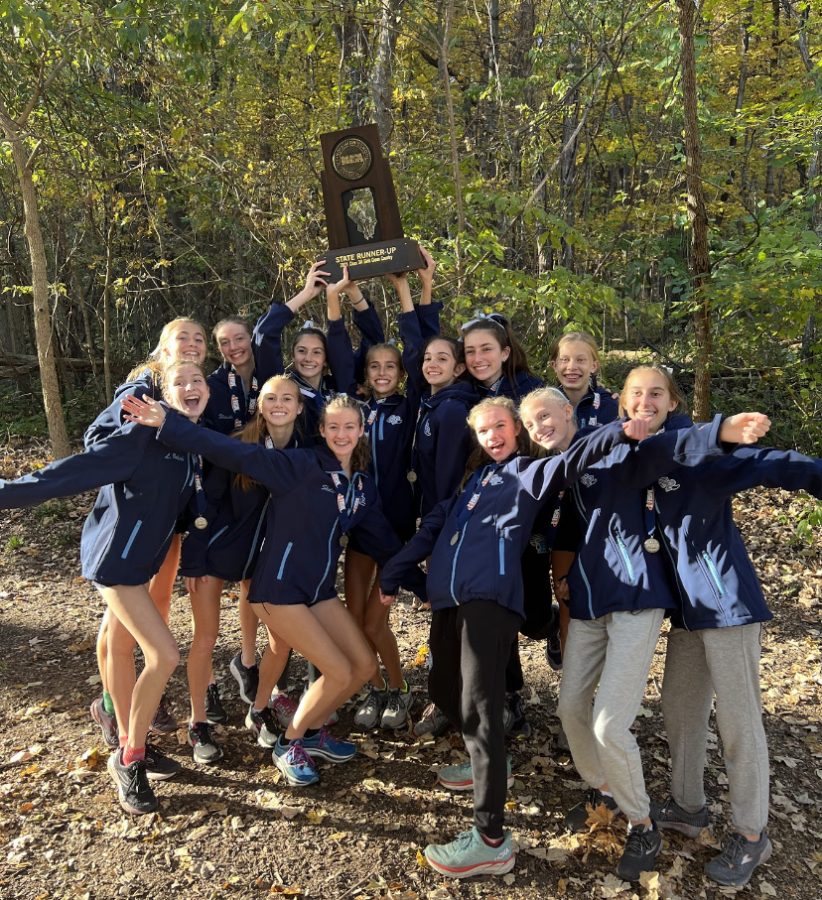 Hailey Erickson, along with several of her teammates, celebrate by hoisting the IHSA state runner-up trophy high above their heads.

Hailey Erickson, Audrey Ginsberg, Lily Ginsberg, and Cam Kalaway had just come off of a triumphant track season as state champions of the 4×800 meter race in the summer of 2021. After a short celebration and a well-deserved break from running, the girls had to switch their focus to cross country. As early as the summer before the cross country season even started, the varsity girls of Prospect’s cross country team knew they had big goals.

With key athletes like Sophomore Bridget Derengowski and Junior Cam Kalaway facing injuries throughout the season, it came into question whether or not they would be ready to compete in the state meet. But after countless bike workouts and exercises tailored to their injuries, all seven of Prospect’s top runners were more than ready for the meet.

The clear skies and sunny weather were tell-tale signs that this would be a fast race at Detweiller Park, the IHSA state course in Peoria. Head Coach Pete Wintermute couldn’t contain his excitement the day of the IHSA state meet.

“Anytime you prepare for some of these bigger races, like your body is just filled with … emotion, excitement. The thrill of the day is here and you know, this is a pretty special group.” Wintermute said. “As they came through the 400 [meter] mark, I could already tell that they were kind of hooked up with their teammates, and you know, I felt pretty confident they’re ready to do great things.”

Sophomore Lily Ginsberg helped lead the team with confidence by finishing 11th place in the state. Running alongside her was teammate Hailey Erickson for the first mile, Ginsberg and Erickson came across the first mile in a blistering five minutes and 30 seconds. With two miles of the race left to run, Ginsberg continued forward on this historic cross country course. Her second and third miles were both run in five minutes and 44 seconds. Ginsberg crossed the finish line in 16:58, breaking 17 minutes for the first time in her career, earning a lifetime best. Lily Ginsberg finished in 11th place earning All-State honors.

“That feeling of knowing that these girls did this [is amazing],” Wintermute said.  “You know, this was ultimately about them and what they did on their day.”