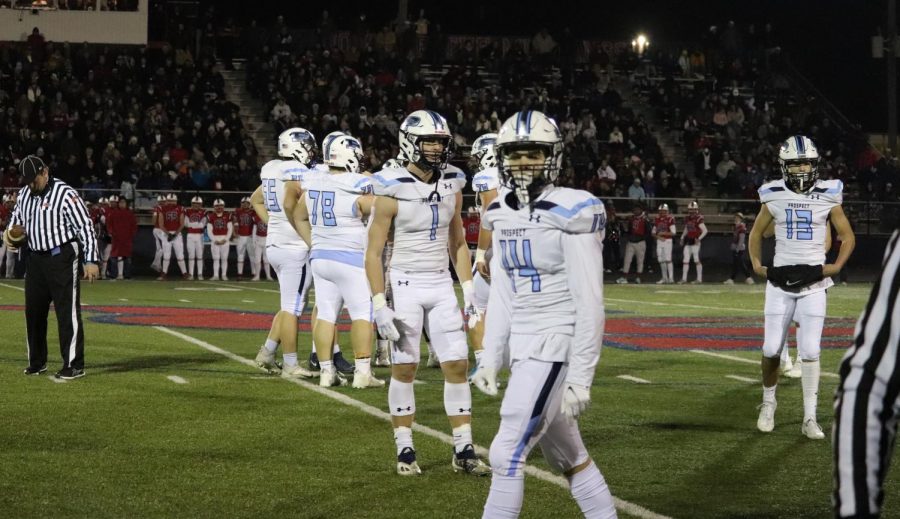 Knights Playoff Run Comes to an End in Semifinals

One of four. The Knights got the opportunity to play in the semifinals Nov. 20. against the St. Rita Mustangs, being one of the last four teams alive in the IHSA 7a playoffs. Unfortunately for the Knights, the outcome wouldn’t be in their favor as the Mustangs got the best of them with a final score of 42-20.

“It was not the result we wanted,” head coach Dan Deboeuf said. “It’s going to sting for a long time but [I’m] super proud of these guys. I mean the adversity we overcame to get to this point [with] this group of seniors especially. It’s going to suck, we’re going to be sad, there are going to be tears but I think once the dust settles we’ll understand how special the season was.”

Just to even make it to this game was an accomplishment of its own.

“We’ve been working so hard from June and July,” senior wide receiver Owen Walter said. “We’ve been pushing each other every single day wanting to get better, trying to win the day and it just shows that it paid off [by] playing in a [semifinal] football game. We’re one of four teams playing in the state.”

The score was close early on as the Knights and Mustangs were knotted up at 7-7 but in the second quarter the tides really started to turn. The Mustangs scored 28 unanswered and went into halftime with a 35-7 lead. Walter was the one who scored for the Knights on a touchdown run out of the wildcat but the deficit at half would just be too much for the Knights.

The Mustangs started the second half with an opening drive touchdown making it 42-7 and that would be the end of the scoring for the Mustangs. Junior Brad Vierneisel was able to connect with junior Jake Parisi twice throughout the second half giving the Knights their final two touchdowns of the season.

Throughout the Knights playoff run, they saw constant adversity whether it was having quarterbacks go down, tight games or constantly being doubted. It wasn’t an easy route.

“It honestly made it more fun,” Walter said. “No one was pushing for us to win except for ourselves, we were just able to battle, battle, battle, play our game, stay within us and we had so much belief in each other it just made the [games] so much more fun.”

According to Deboeuf, these are the types of runs that set the bar for future teams.

“It says a lot about the character of these seniors specifically and I think when they look back in the future here they took a huge step for our program,” Deboeuf said. “From 2006 to be at this point and now it’s the expectation and now we’re expected to win conference and make deep runs and by actually going through it and the experience the younger guys got, it’s exciting.”

Playing in these high level games is crucial for the juniors and sophomores on the team in order to build up that experience.

“This really helps because now they’ll know when they come into this game they won’t be all jittered out,” Walter said. “It’s just another football game and that’s what helped so much last year with the senior class. When we went over to Barrington everyone was saying that’s the championship, that was the super bowl. That was such a high intense game [and] now these juniors know how it feels to play in a big game like this and they’ll be comfortable next year when they go and win it all.”

Deboeuf agrees with Walter but this is also something that he’s seen throughout the year.

“For them, the whole way through to see [the seniors] and how they carry themselves, how they react to negative situations, how they travel [and] how they work in the weight room,” Deboeuf said. “All those things they’ve been able to be around and see that and the formula works obviously so they know to buy into it.”