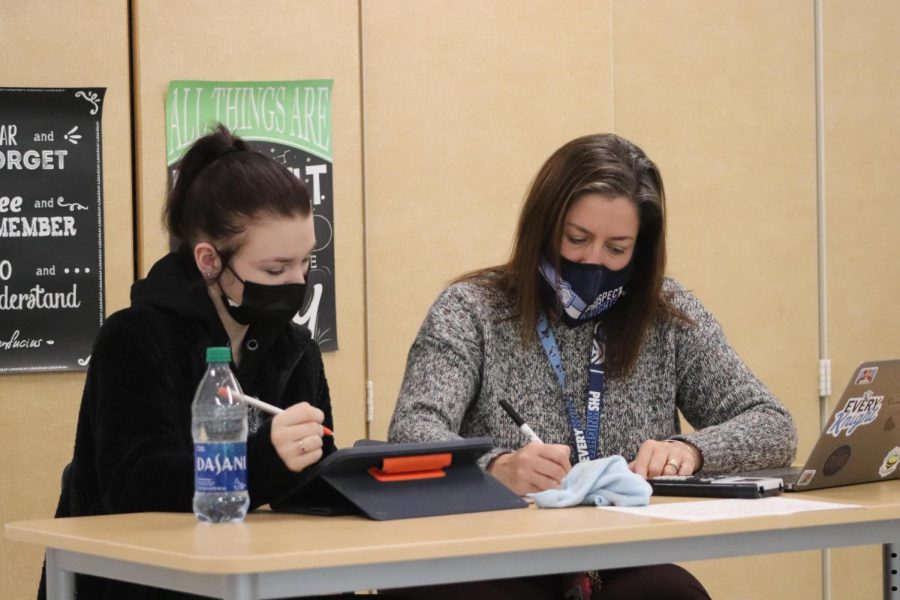 In the middle of the night, guided studies and special education teacher Kim Murray found herself walking past her son’s room. Though most of her surroundings were pitch black, a blinding bright light caught her eye.

Curious as to what the source was, Murray peeked into the room and saw her son asleep with his cell phone laying on his chest. As a parent of a sixth-grade student, this was not the sight she was expecting as she stood watching at close to 2 AM in the morning.

Murray wasn’t worried about whether or not her son was actually using his device; it just got her attention. She realized it was unrealistic for her to think that he would not be using his phone in the middle of the night, as many other children his age were probably doing the same thing.

“That was the last time [my kids] were ever allowed to have their cell phones in their rooms,” Murray said. “… That was when it changed in our house.”

That sight made Murray realize that the household could use a new set of expectations.

Murray is very passionate about having these rules for her kids because she wants them to have a healthy mindset, and she would later have rules that came from that same mold in her classroom years later.

Murray notices that growing up without a cell phone attached to her hip in her childhood was a key difference compared to the media-dependent world her kids are being immersed in today.

“There was a time where you could go out to dinner and you wouldn’t worry about who called you because there would be a message on our answering machine at home,” Murray said. “And now we are so used to that instant gratification [of receiving] a notification.”

Implementing these practices at a young age was critical, and Murray notices that her sons have packed them up and taken them along with them to college in the form of improved study habits. Texting or calling one of them and not getting a response because they put their phone away in the library while studying is a big win in her book.

“It was my sophomore year of college, [and] I was having some mental health problems and was just kind of in a slump … [I] was thinking back to that moment [with my mom], and it helped guide a decision where I took myself off of social media,” Jake Murray, her eldest son, said. “I deleted all of the apps, I took down my profile, and I think without having that background of having a limit and knowing it could be helpful, I wouldn’t have been able to do that.”

Because of Murray’s belief in forming stronger in-person connections instead of ones through a digital format, she finds a special enjoyment in being a special education teacher. In this position, she is able to have close relationships with all of her students, facilitated by her smaller classroom sizes as opposed to having a large volume of students coming in and out.

Murray believes that the most valuable life experience that she puts into her career did not come from any professor or college course textbook, but from being a parent. As a self-proclaimed tyrant a few years back, Murray says she laid off a bit after seeing how diverse and varied the student body could be.

“I think that I see the bigger picture better; that really [helping children] is more about growing a person than it is growing a student with a bunch of letters,” Murray said.

Murray says that she’s learned a lot about what she hoped her sons were experiencing and that it has helped her guide her current students. Raising children who didn’t struggle turned into meeting and focusing on those who do.

“I sort of take pride in the fact that my classroom is comfortable for certain kids and that they like to come in here so … whenever my room is open anybody is always welcome,” Murray said. “… I think it’s just being available and allowing students to be vulnerable and not be threatened … we celebrate victories and then we work our way through challenges.”

Like the rule at her home of not having either a phone or iPad when sleeping, Murray also implements the same technology practices in her classroom to an extent. At the beginning of class, all phones are placed on a table at the front of the room and are up front until students have determined that they have taken care of anything and everything necessary for school.

“It’s kind of like a drug,” Murray said. “People have to be willing, to some degree, to put it away. So if I’ve at least put that idea in their head that no one said you have to put it away forever, to do things and say, ‘OK I’m going to put it away for 20 minutes and … take a break.’”

Murray says that she tries to remind herself not to be too much of an authoritarian when it comes to her students and their social media usage, but holding them to standards is important to her teaching philosophy. Murray is no hypocrite, either, as she tries her best to apply her rules of media to herself.

“If I’m asking them to do something I try to do the same,” Murray said. “I try to practice what I preach.”