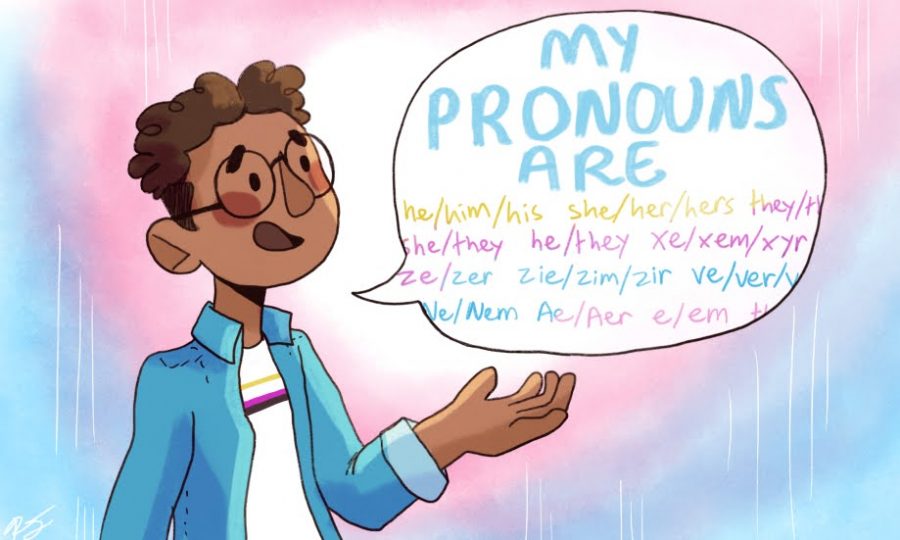 After changing his pronouns sophomore year, senior Me Zala walks the halls of Prospect facing disrespect and violence for simply existing as a trans person.

“There are a lot of crappy people out there, Zala said. “And I have definitely been bullied and I have been pushed in the stairwell multiple times just for being trans.”

On the other hand, Zala has found that being involved in the arts has made a huge impact on his life. He feels supported and validated by everyone involved.

“There’s a really good acceptance in the fine arts department for everybody in the LGBTQ community,” Zala said. “There are bound to be people that support you.”

In the past year, a number of teachers have become more aware of asking students for pronouns. This changed partly due to Zoom, where students could put their pronouns right next to their name for everyone to see.

Although Zoom has made an impact on teachers asking students, engineering teacher Thom Ringrose has been asking for the last few years. He sends out a Google Form at the beginning of each school year where he asks for students’ preferred name, pronouns and other information. Doing this provides a safe environment for kids to tell him what they would like to be called. In the recent years he has had more transgender, agender and genderfluid students in his classes, so he has realized the importance of asking.

“It’s their identity,” Ringrose said. “Be respectful of what anyone else thinks; they get to make that choice for themselves.”

In a similar way, English teacher Matt Love has been noticing that more students have been showing a preference in what pronouns they would like to be used. In the first week of school, Love always sends out a quick student survey asking generic questions such as “Why did you take this class?” and “What kind of learner are you?” This year he added the question: “What are your preferred pronouns?”

It’s more important than anything else that everyone feels comfortable when they come into this room everyday.”


“It’s more important than anything else,” Love said. “That everyone feels comfortable when they come into this room everyday.”

While some teachers try to ask, many teachers do not. Sophomore Emerson Ford, who uses they/them pronouns, says that only one of their teachers asked the class for pronouns this year. They said that their teacher had everyone write their preferred name and pronouns on a note card. Then they could introduce themselves to the class but did not have to share pronouns if they did not want to.

“It’s good to ask for pronouns, but it’s not good to force anyone to share pronouns if they’re not comfortable with it,” Ford said.

Ford thinks that using this notecard method or the Google Form method is a great way to ask students for pronouns. They do think that teachers could do a little more to make students feel comfortable though.

“[Teachers could take] more care not to assume pronouns, asking students and just being more receptive,” Ford said. “Cause even if not every teacher asks for pronouns, if we can normalize asking for pronouns in at least some sense, students will be more comfortable sharing them. It’s not just a lot of pressure put on some students.”

On the contrary, Me Zala, a transgender student, believes that teachers should ask everyone for their pronouns at the beginning of the year.

“It should be like [asking for] a name; it’s still an identity,” Zala said.

Zala also thinks that teachers should say people’s last name when taking attendance at the beginning of the year instead of their first. This way people can say their preferred name right away.

Since Zala does not even go by his first name, it is easier for him to feel comfortable that way.

“I mean, I know it’s hard,” Zala said. “But if you want to be sure with yourself and accept yourself first, you have to realize that you are your own advocate so you have to speak up.”