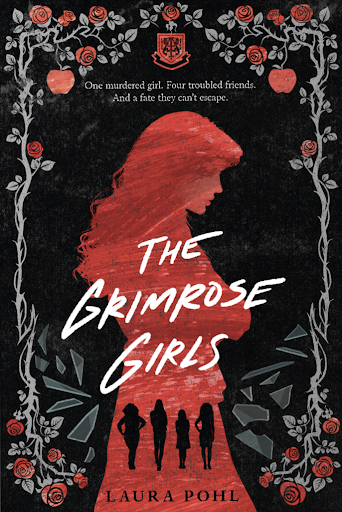 “The Grimrose Girls” review: the dark side of fairy tales

Fairy Tales always end with the phrase, “And they lived happily ever after.” Right? Right.

In The Grimrose Girls by Laura Pohl, most of the fairy tales end with death. Brutal, brutal death.

With the apparent suicide of one of their closest friends, Rory, Yuki and Ella are left reeling. Something about it doesn’t fit, yet everyone at Grimrose Académie seems content closing the storybook there. With the help of new girl Nani, the closest friends of the victim are left investigating what really went down the night their friend died.

The Grimrose Girls has four main characters, which seems like quite the undertaking, but somehow Pohl executed it brilliantly. All of the characters featured throughout the book — whether they had 2 lines or whole chapters of POV — were fleshed out and vibrant.

Throughout each of the characters, I really enjoyed seeing the parallels to different fairy tales. Fairy tales in general are the heart of the story. Dark and twisted versions of them, sure, but these stories are what managed to drive the plot. Down to the characters and their situations, to the murders, to the final revelations— I found the interwoven tales to be both clever and wholly captivating.

That being said, I would have loved to see more stakes throughout the entire story. Girls were being murdered left and right and the school’s administration was just like, “Welp, another day in the life I guess.” Um, what?? I mean, it is not abnormal for adults in young adult mysteries to be useless slugs, but even still, the main characters never had any urgency. People were literally dying and they were like, “Oh no! Should we get on that soonish, maybe?”

The pacing, however, was just to my liking. There are clearly three acts and each clearly aims to accomplish something, with a nice revelation as a cherry on top. As someone who normally polishes off a book in a day, I found it to be a solid pace. If you are reading it over the course of many days though, I can see how the lack of urgency in the plot would make it hard to push through.

The ending was… well, it was something. It went in a direction I was not expecting, that’s for sure. I think I liked it though?

The character arcs and everything was figured out and left in a good place, but the plot lacked some of the closure I would have liked. Maybe that is the setup of the next book talking (currently slated to come out in November of 2022!), but I struggled to see the motivation for some of the final plot points. The shock factor, though, was very much there so points for that I guess.

Overall, The Grimrose Girls was totally binge-worthy and a dark fairytale delight. I’d say the pitch Once Upon a Time meets Pretty Little Liars is pretty fitting for this one. It also has that dark academia vibe as well as lots of diverse characters. It is dark, twisty, and all around a really great read!

And alas, with this book as their next read, I would say the potential readers would read happily ever after.

SHOULD YOU READ THIS: YES!