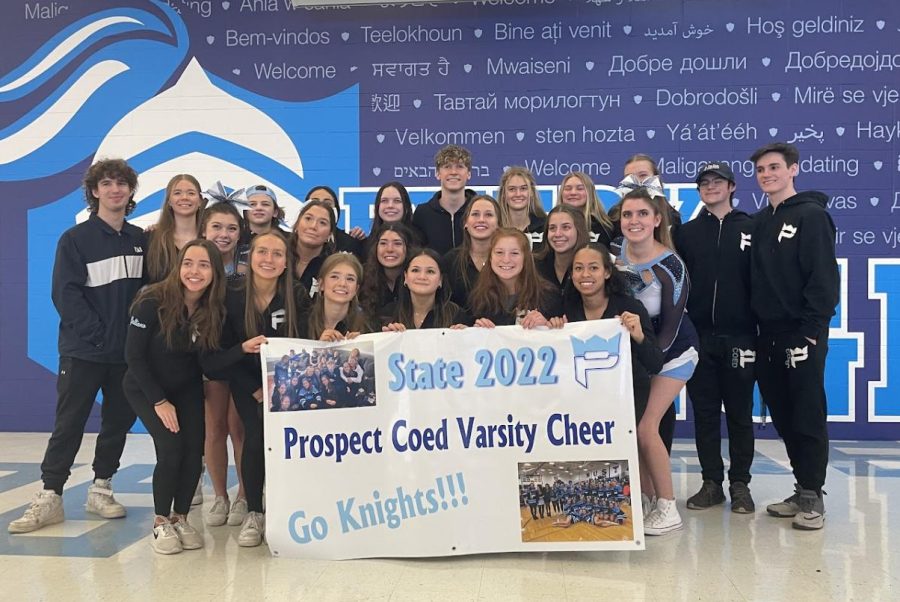 Prospect Varsity Co-ed Cheer packed up, and rolled out Thursday, after qualifying for the IHSA State Championships in Bloomington, Illinois.

As the drumline led the team through the droves of cheering Prospect students celebrating the team’s accomplishments, senior flier Anna Greda reflected on the team’s success at the varsity sectionals, which secured their position at state.

Just two years earlier, Greda had her heart broken, when the team missed the state qualifier by one position. This time around, Prospect Cheer needed to be placed in fith position or higher to make it down state. As the team gathered on Rolling Meadows’ fieldhouse floor, the nerves were palpable in the air. And then, pure joy.

“I was extremely excited,” Greda said. “It feels like a dream that I get to go to state with my team. It’s a once in a lifetime experience. I had tears in my eyes when they called our name for fourth place. It was a really great moment and felt like all of the work we put in really paid off.”

I had tears in my eyes when they called our name for fourth place. It was a really great moment and felt like all of the work we put in really paid off.”

It’s worth noting that this year is like none in the past for Prospect cheer, for the fact that this is the first time in recent memory that the team is coed. Senior base/backspot Cal Kraft has enjoyed an exciting first season on the team.

“It was a little rocky at first,” Kraft said. “We had a lot of changes but this last month in particular we put it all together.”

Both Greda and Kraft attribute the team’s success – in part – to the team’s collaboration. Kraft says one of his favorite parts of being in the group is the team building they do outside of school to get everyone on the same page.

“I’m friends with everyone on this team,” Kraft said. “[I credit] our willingness to make changes and give each other feedback. We’re always giving feedback.”

Although it’s just Kraft’s first year on the team, he says he has created incredible bonds with many of the other athletes, including Greda who has competed in cheer since her freshman year. Greda has seen the team go through many changes, and is happy to finish her high school career with this team.

“It feels amazing, although bittersweet, I think it is the perfect ending,” Greda said. “Leading my team to state and being able to end it with completing all of the goals we had previously set really wraps my time up with the program, and leaving it in such a positive experience is great.”