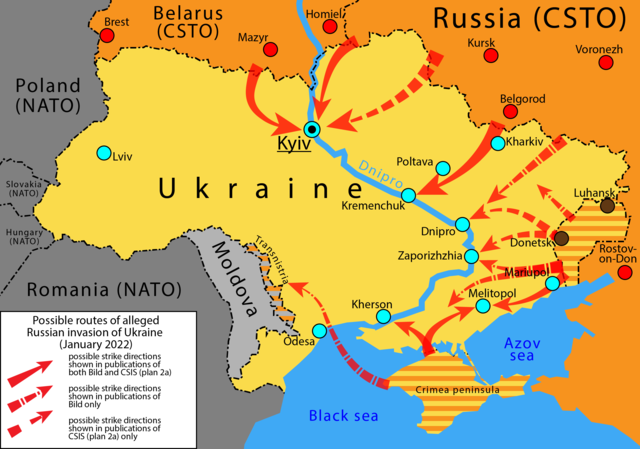 Tensions are rising among the European continent. Russia and Ukraine are on the verge of exploding.

Ukraine used to be a part of the Soviet Union in the previous century, and then broke away from Russia in 1991. Currently Ukraine wants to join the NATO alliance, but Vladimir Putin and Russia seem to think that Ukraine may be a threat to Russia’s power.

Both Russia and Ukraine claim to be willing to fight a war if it comes down to it. Russia now has 100,000 troops at the border ready to strike.

Putin spoke on February 1st for the first time since December on the potential conflict. He accused the U.S. and NATO of ignoring Russia’s desires.

Some of the demands Putin has made is for a ban to be placed upon Ukraine entering NATO, and a limit of equipment and troops to NATO’s Eastern flank. Otherthan that the motives for Russia’s potential invasion aren’t very clear.

“No matter what I’ve looked at, I cannot see what it is that Russia’s long term goal is,” World history teacher David Schnell said.

Putin also said the U.S. was using Ukraine as “a tool” to stop Russia’s power. Ukraine President Volodymyr Zelenskyy said that if a move is made, the war will not just be between Russia and Ukraine. He warned it would be a conflict fought by the majority of Europe.

Schnell disagrees with the statement by Zelenskyy. Since Ukraine is not an official NATO member, there is no response needed to rescue Ukraine. Schnell believes if there is an invasion, Ukraine would just have to split off parts of its territory, which would be similar to the 2014 invasion of Crimea.

Putin has said he doesn’t want to invade Ukraine, but if the West continues to be so aggressive in their manner, then measures will be taken by Russia. Russia is also looking for a pretext to justify an invasion of Ukraine.

Although these threats by Russia could just be an effort to legitimize their power, this conflict has to be handled seriously and cautiously to prevent any further escalations.

“Because I can’t tell what the motives of the Russians are, I don’t know what the final endgame should be,” Schnell said.