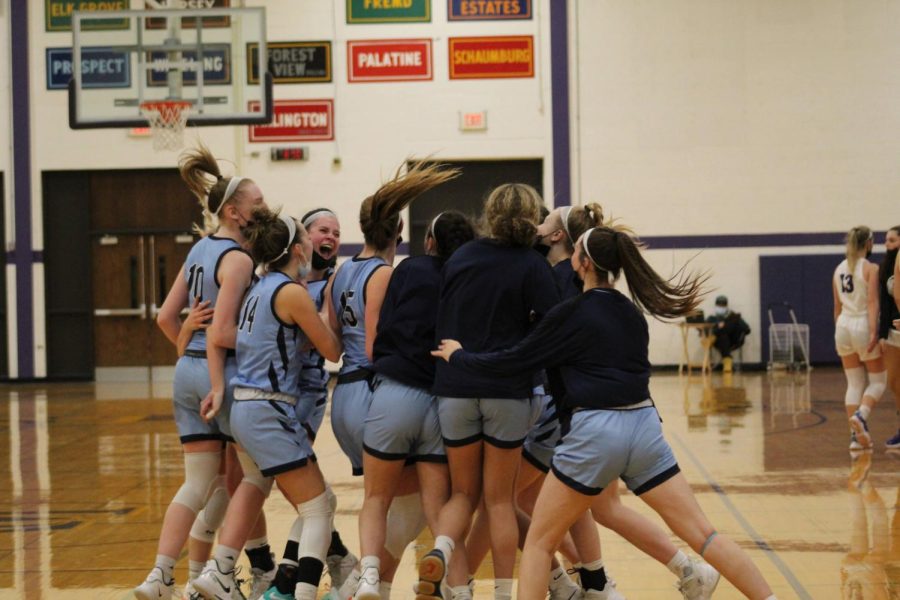 With the MSL East championship on the line, Prospect defeated Rolling Meadows 57-46.

The girls secured a MSL east co-title with their rival Hersey.

When Prospect lost to Hersey it set forth multiple tiebreakers. It first came down to head to head point differential, but they both lost by 3 to each other. Then it went to blow out wins, which is a win by 7 or more. Prospect then had to win the rest of their conference games by at least 7 points for them to tie that as well. Finally, it came down to when each team was last in the MSL East championship. That team was Prospect.

The Knights started off strong, leading 35-30 at half time. Prospect never looked back from there.  Senior leading scorer Andie Will showed up to play with a total of 24 points.

The Prospect girls basketball team had not won the east since the 2014-2015 season. When it finally came this year Will said it was a huge accomplishment for the girls team.

“It’s a pretty great feeling, we have worked so hard so we are super excited,” Will said.

According to Will, Her teammates really had to work together to achieve this goal. This meant knowing everyone’s needs and skills, and  letting some step up when others need to step down. This mentality has been led by head coach Matt Weber.

“That’s the nice thing about a team, everyone  wanting to work together, everyone  stepping up at different times, and making sure to find the hot hand,” Weber said.

Although Prospect and Hersey are co-champs, the Knights will play against Barrington for the MSL championship title.

This game will be played at Barrington on Wednesday, February 9th. Winning this game would give them the MSL championship and further their advancement to the regional championship game.

“We are super excited to go to the MSL championship,” Will said.