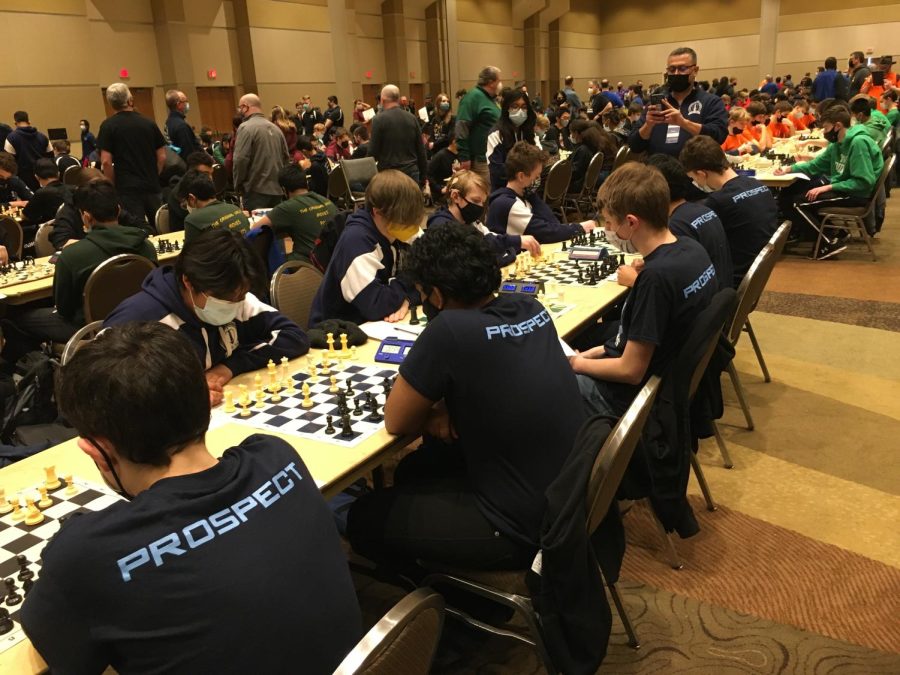 The chess team plays in the state chess competition in Peoria. (photo courtesy of Matt Love)

On Feb. 11 and Feb. 12, the chess team competed at the IHSA state chess competition in Peoria, Illinois and won four out of seven of the games they played.

“It’s not just wins and losses that matter,” said chess coach Matt Love. “It’s the strength of the competition you’re facing and how many points you accrue.”

It’s not just wins and losses that matter, it’s the strength of the competition you’re facing and how many points you accrue. ”

Over the course of two days, the team plays seven rounds, each of which consists of eight games being played simultaneously. Each board is worth a different number of points, with the first being worth 12 and the eighth being worth five. A team wins a round not necessarily by winning every game, but by winning more points as a collective than the other does. Each round has a total of 68 points, making 34.5 the “magic number.”

The team entered the tournament as a 51 seed, and as well as beating all the teams ranked below them, they also won one upset. By the final rankings, the team was ranked 35 in the state.

Leading up to competitions, the chess team meets twice a week to practice and improve. On Tuesdays, the players practice and face each other, while on Thursdays they play against other schools. According to Love, chess coaches in general often have less expertise than their players. Because of this, the players often have much more involvement in helping each other.

“My job is to just take care of everything else … so the players can focus on the game itself,” Love said. This, for the most part, involves aspects related to organization, recruitment and logistics.

According to sophomore and chess team member Daniel Derengowski, a lot of the players’ focus is on improving themselves.

“You just have to win your game,” Derengowski said. “… You really just focus on yourself.”

By the nature of the game, chess is very much an individual activity. While they are a chess team, they aren’t playing in the same game. However, according to Love, the way the system works still requires team coordination and mutual trust.

“Match by match, you need everybody,” Love said. “It’s not enough just to have your top one or two win, you need the whole team to contribute in different ways and that’s usually what happens.”

Derengowski shares a similar sentiment, saying that the main fun of the trip was being with the rest of the team.

While a COVID-19 outbreak on the team could very much be disastrous for them, Love, the team, and the IHSA itself have remained very careful and vigilant. While Love attributes it partially to good timing and luck, he and the team have also been careful about avoiding potential issues.

Love also notes that the IHSA was very good about enforcing mask rules and other COVID-19 restrictions. The team ended up not having to quarantine any players, despite the naturally face-to-face nature of the competition.

While the team did well and put in plenty of effort over the course of the season, Derengowski says the real point of the competitions isn’t really about victory or loss. Instead, it’s more focused on the reason Derengowski joined the team in the first place.

“It was just fun,” Derengowski said.