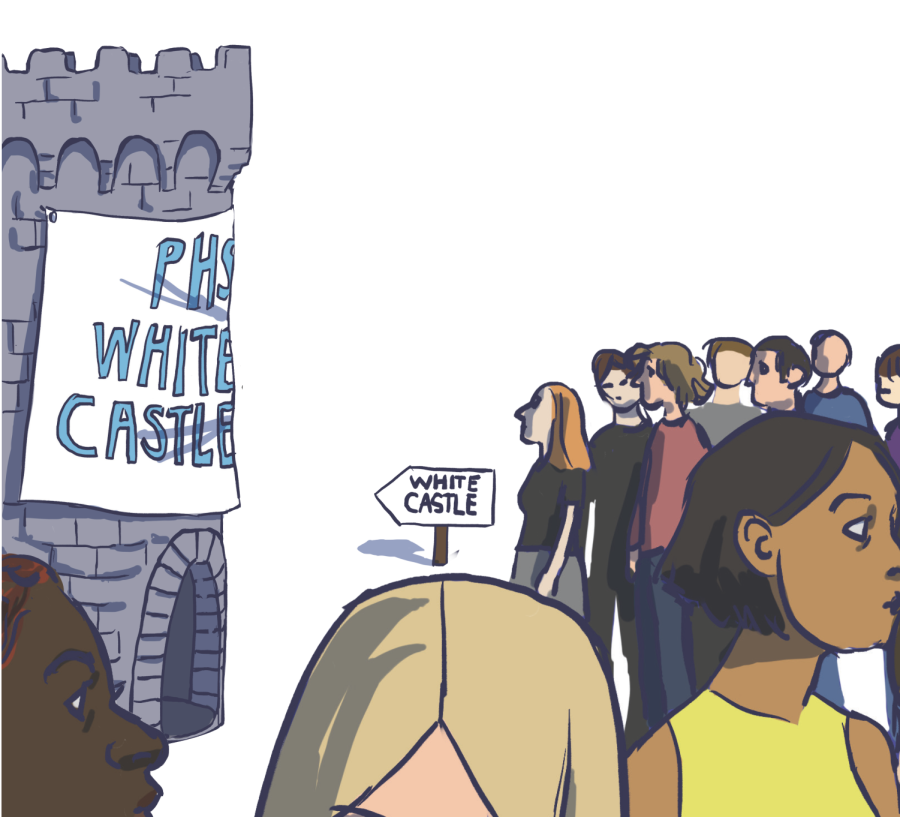 Senior Grace Ko would normally be pleased to receive a compliment like anyone else, however, when it attacks her race, the comment is far from welcome. An older white man at Ko’s work told her that her eyes were very “beautiful foreign, round eyes” that he had “never seen in another Asian person.”

She was at a loss for words, but she forced the words “thanks” through her lips. Inside, she was disappointed and disheartened that she was being perceived as beautiful because she looked more white.

“That comment really made me realize the microaggression behind his idea that Eurocentric features are the beauty standards and how belittling that is to Asians,” Ko said.

She wasn’t surprised that this happened, and she did not think that the man said that to intentionally insult her, but she still felt that his words were filled with ignorance.

“People are born into certain lifestyles and born into neighborhoods where it’s just predominantly white, so they’re never exposed to different … [people], cultures and different places,” Ko said. “That’s the main reason why people don’t open their eyes to the stuff going on in the world — because it doesn’t concern them. It’s important for people to understand the different views especially from minorities. But, that doesn’t happen because they’re never exposed to it or they themselves don’t experience it.”

Hayes said his goal for over 30 years as mayor was to “maintain the reputation of Arlington Heights.” To him, the Arlington Heights and the Mount Prospect area are family communities, and he wants to uphold that by making steps with the Village to increase diversity in the area.

“What we want to make sure that we do is that [people of color] feel welcome here,” Hayes said. “Over the course of the next year … or so it is [our goal] to try to break down any remaining barriers just to make sure everyone understands that this is a place that you should feel welcome [in].”

While Arlington Heights is taking these steps, it will be a long process due to the deep history of residential segregation in the Chicagoland area, according to AP U.S. History and former AP Human Geography teacher Michael Sebestyen.

In fact, USA Today ranked Chicago as the third most segregated city in the U.S. This is a result of numerous factors such as the history of de facto and de jure segregation, the use of property taxes to fund public education, the Great Migration of Black people to major urban centers and more.

Sebestyen believes that diversity should be the end goal, but he notes that the U.S. is not an isolated case with its challenges surrounding its history of segregation and racial tensions. According to Sebestyen, diversity is not something that can be achieved through one or a few quick actions, but will be the result of a community and government’s consistent actions striving towards it.

“Just putting Band-aids on to situations [and] trying to make quick fixes doesn’t always work; it takes a lot more in-depth process. And that’s been a struggle for us as a society,” Sebestyen said. “[If policy change were to be made,] it’s going to lead to people having to potentially make real compromise and real sacrifice. It wouldn’t solve all [the issues] … But, it would be a start.”

Sebestyen grew up attending a predominantly white all-boys Roman Catholic school and didn’t see a more diverse population until college. He thinks that awareness of others’ situations and perspectives is important for self-growth and that gaining that awareness will not come by staying in one’s environment.

“I think every time that bubble that I grew up in, that I live in, grows and I get more experience with people that don’t look like me, don’t act like me, are different than me,” Sebestyen said. “[That guides me to being] better … hopefully, as a person, as an educator and as a parent [while] also recognizing my own faults within that process.”

1995 Prospect alum and current Prospect parent Tom Riesing has lived in the Arlington Heights and Mount Prospect area for over 40 years. Growing up in the area, he didn’t realize how homogenous it was until he went to school at University of Illinois at Urbana-Champaign.

Riesing decided to move back to Arlington Heights after college because of his fond memories of growing up here and its close location to his office in Chicago where he works as a graphic designer. Even though he does enjoy living here and being able to raise his children in this community, he does wish that the area was more diverse so that his kids can realize the benefits of exposure to broader perspectives.

“Well, there’s diversity in the world, right? So, I think it’s not fair for us or [for] our kids to grow up in an area or community where they only see the same type of person; I think, diversity is incredibly important,” Riesing said.

The Village of Arlington Heights also invested in bias education as part of their strategy to “welcome all.” To pursue this initiative, Kaleidoscope recommended the implementation of community outreach programs, workshops and more representation from community members of diverse populations possibly in the form of an ad-hoc committee.

Despite the Village’s efforts towards their DEI Project, Riesing and Ko think that Arlington Heights and Mount Prospect should take more direct actions with it because they weren’t aware of it and didn’t think that diversity was necessarily promoted. Additionally, they both agree that it would be advantageous for these city governments to hire more people of color as a part of encouraging diversity.

“We all can do a better job of making sure that the people in power or in employment within the city should be more representative of the population,” Riesing said.

Evidently, the consulting group specifically recommends that the Village should go further than creating a government body representative of the current Arlington Heights population and take the opportunity to make it reflect the community they “want to be in the future.”

The report pointed to research that shows how organizations with gender and/or ethinic diversity outperform those that are not diverse. One mentioned finding showed that an ethnically diverse organization can outperform up to 35% over their counterpart.

This leads the consulting firm to recommend that the Village should include diversity and inclusion as a management and performance objective in annual reviews while also employing new hiring policies that widen the pool of applicants.

Kaleidoscope also noted that they are pleased with the overall government’s sentiments surrounding the willingness to make these changes towards DEI instead of reacting with “if it isn’t broken, don’t fix it.”

Because of these recommendations made by the consultant, Ko hopes that there will be tangible improvements that show in the area with more people becoming more aware and open-minded.

“[The benefits of diversity] comes back to a willingness to at least listen doesn’t mean you’re going to agree with everything,” Sebestyen said. “But [to have] a willingness to listen, and to actually have the conversation, keeping an open heart and an open mind, the better off we’re going to be.”