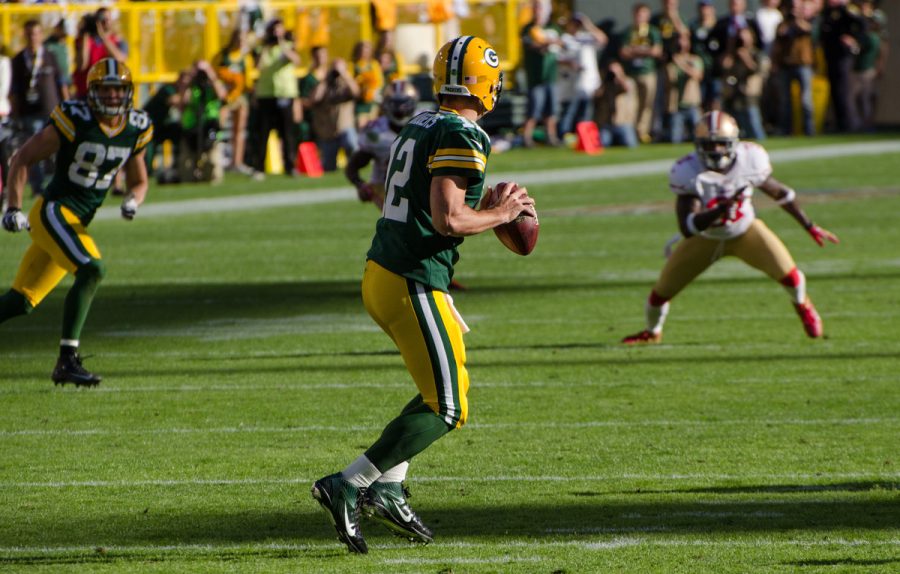 Free agency frenzy: the 200 million dollar man from the bay

With the 2022 NFL season over and free agency frenzy starting to heat up the first big signing has occurred. Football fans were skeptical if 38 year old quarterback Aaron Rodgers was going to come back to Green Bay after losing a defensive battle to the 49ers in the frigid Wisconsin weather.

This season’s current playoff loss is the 11th straight year the Packers have not been able to reach the big game even with their immense amount of Talent. Taking this into consideration it raised concern for Packers fans as it might have been Rodgers last dance in Green Bay.

Though on Mar. 8, that concern was thrown out the window as Rodgers signed a 4-year 200 million dollar contract (50 million a year) to stay in Green Bay presumably till the end of his career. With this contract Rodgers will now be the highest paid QB in the NFL surpassing Kansas Cities QB Patrick Mahomes.

For Packers fans this is a celebration as they will be ruling the NFC North for another half a decade. For fans of the other teams in the NFC North it is a hair pulling fiasco as Rodgers teased fans with no clear answer if he would resign or retire during the days before the contract.

Mathew Wittwer has been a Bears fan for as long as he can remember. He expresses his feelings towards Rodgers signing and how it affects the landscape of the NFC and the North.

Mathew’s concerns on the Rodgers signing is him going back with Green Bay which most likely means that they’re going to win the division again.

“Instead of other teams getting the opportunity to win, the North will still be owned by the Pack. Rodgers’ return signifies that they’re still trying to compete and win a Lombardi,” Wittwer said.

After hearing the news Wittwer was 50/50 on the signing, a portion of him was fuming that Green Bay would have Rodgers back. While the other portion was not surprised that the signing occurred.

During free agency there have been a couple other big name QB trades that affected both conferences. Seattle’s QB Russell Wilson was traded to Denver for two first round picks, two second rounders, a fifth and three players for Wilson and a fourth rounder in the 2022 and 2023 drafts.

Additionally Colts QB Carson Wentz was traded to the Washington Commanders for a 2022 third-round pick and a conditional third-rounder in 2023 that can become a second if Wentz plays 70% of the snaps next season.

Wittwer shares his opinions on how these trades can affect where other players will land and stay next season especially with the Russel Wilson trade.

“I think lots of free agents will consider the Broncos as a possible spot to play because of Russell Wilson’s presence there,” Wittwer said.

He adds on to the immense impact Wilson’s trade to the Broncos is and how elite players like him being traded have so much of an intact on free agents’ decisions of where to sign.

“It’s insane to think only one player has this power but it has been done before with [Tom] Brady going to Tampa he brought Gronk out of retirement,” Wittwer said. “Players can now consider the Broncos an option because they have a shot.”

He talked about how Wentz will be returning back to his old division where he played on the Eagles during his rookie contract and how this changes the NFC East.

“The cowboys with most likely win that division again this year with the talent they have but the Eagles and Washington should battle it out for second place which I believe the eagles will win,” Wittwer said.

“One thing for sure is that the AFC West will be one of the most exciting divisions to watch this year with the quarterback talent being insane with Mahomes, Carr, Herbert and now Wilson. Seeing those QB battles in that division is going to be a show,” Wittwer said.

As NFL free agency continues and goes deeper and deeper into the off-season fans should be on their toes waiting for the next big trade or signing as this off-season has already shown that the NFL will be looking very different next season with its fair share of surprises that have already happened.