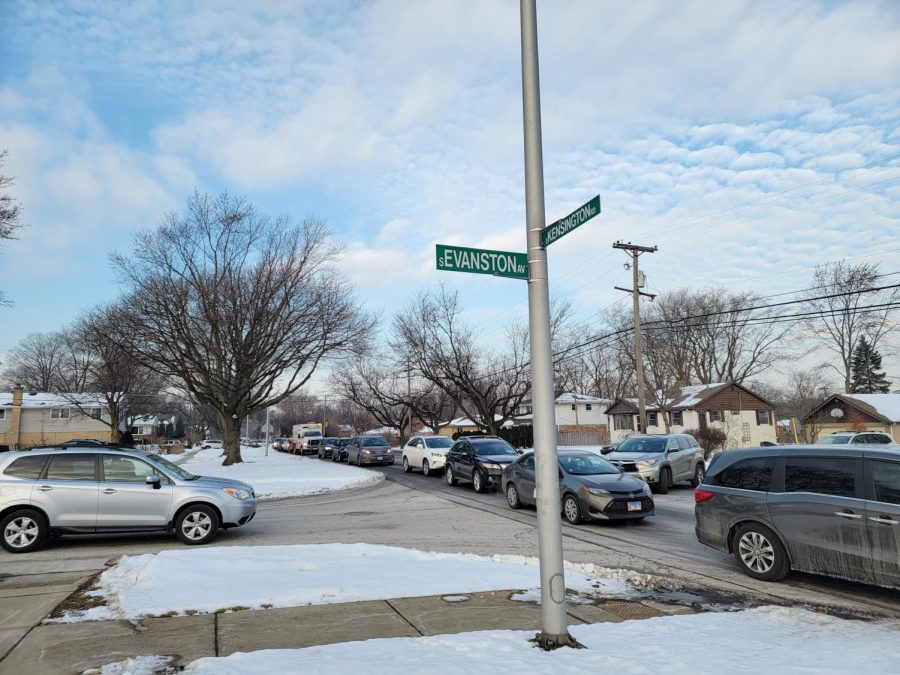 Foot Off Gas, Late to Class

On junior Luke Holtmeier’s first day back to school this semester, he backed out of his driveway at 8:10 a.m. as usual in order to arrive at Prospect for his class at 8:35 a.m. As cars piled down the street outside of Prospect, he thought to himself, “Oh man, this is going to suck.”

His home is just over 3 miles away from Prospect, and along the way he picks up one to two friends to carpool with. He notices that picking them up doesn’t really affect his commute time of around seven minutes.

Where his drive time dramatically increases is along Forest Avenue, leading to Prospect’s back entrance. He says he arrives at the school at 8:20 a.m., but doesn’t get into the building until 8:35 a.m. because it takes so long to get into and weave through the parking lot. 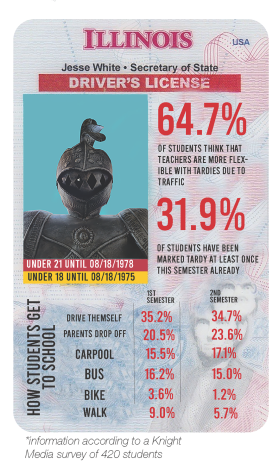 “When I left for school … I was kind of excited to go back because I can see people,” Holtmeier said. “And then just when you see the lines [of cars], you don’t have that happy feeling anymore. You have a feeling of ‘I am going to be late,’ and you’re overthinking if your teacher is going to care if you’re late or not.”

When Holtmeier arrived at school, he was already late for class. Luckily, his teacher didn’t mark him tardy because a number of students in his class were walking in just after the bell, as well, due to the unforeseen traffic.

With the colder weather making it more difficult for students to come to school via bike or foot and even lengthening the time for cars to warm up, there has been an increase in traffic going into Prospect’s entrances between the times of 8:25-8:35 a.m.

An email sent out by Principal Greg Minter on Jan. 13 recommended that parents drop off their students in the morning before 8:25 a.m. and stated that students who consistently arrive late will lose their parking privileges. He added that if a student has a late arrival, they should arrive later than 8:45 a.m. in order to reduce traffic.

Minter said in an interview with the Prospector that the email was intended to encourage students and parents to rethink their morning commute, because he has seen an increasing number of parents dropping their children off at door 6 right before or as the bell rings. He says there is a natural increase in the number of students getting rides from their parents, which he attributes to COVID-19 and the need to reduce the risk of spreading the virus on buses.

The increase in traffic is generally predictable, Minter stated, since all high schools experience the same conflict of having hundreds of vehicles converge in one spot within a 10-minute timeframe.

On Jan. 21, an email from Deans Adam Levinson and Nicholas Olson reaffirmed that tardies will be given out if students are late to school, and after two tardies, a lunch detention will be assigned. It was not specified how many tardies would be issued before a parking pass is suspended.

For Holtmeier, if his parking pass were to get suspended, he him and all the members of his carpool would need to take the bus or find a ride elsewhere — after getting a lunch detention. He thinks that this is counterintuitive because if people need to have their parents drive them instead of carpooling, it will add to the traffic, and a number of his friends’ parents already don’t want their students taking the bus because it may increase their risk of infection.

Sophomore Mathias Anderson is one such student who will lose his ride if his driver is marked tardy enough times. Anderson remembers being driven to his first day at Prospect this semester after transferring from Rolling Meadows High School. As he sat in the back seat of his friend’s car with already heightened nerves, those anxieties were then compounded with the added stress of being late to his first class.

Anderson has a driver’s license and a car, but he can’t get a parking pass since he’s a sophomore, and his bus stop is a half mile walk from his house in the cold since he lives out of Prospect’s boundaries. If he were to take the bus, he’d have to leave his house 30-45 minutes earlier. His friend offered to drive him, but by the time they could see Prospect, they were already stuck in a horrendous line of traffic. While sitting inside of the car, Anderson already knew he was going to be late.

He walked into his first class only around 30 seconds after the bell, so he wasn’t marked tardy. He said it still made him feel strange walking waking into his class late since he already stood out as a new kid.

Junior John Bartsch isn’t new to Prospect this year, but they still share that feeling of discomfort when walking into class past the first bell.

“[When you’re late to class], you come in feeling bad already,” Bartsch said. “So first period is tough because I’m tired and annoyed and embarrassed. It’s just a bad start; … it can really suck [for] at least first period, if not the rest of the day.”

Before going to AP Language and Composition, Bartsch takes Kensington Road, which has seen the heaviest traffic increase between the two entrances.

“It’s frustrating [seeing the line down Kensington] because I can’t just leave my car in the middle of the road and walk [to school],” Bartsch said. “And then I get to the doors, and the people at the front door say, ‘You’re late.’ Of course I know I’m late; I’ve been out in the parking lot for 10 minutes.”

Even though Bartsch, Holtmeier and Anderson have all walked into their classroom late at least once in the morning, they have all also experienced their first period teacher forgiving their tardiness.

Anderson thinks that teachers being flexible and understanding about students being late to first period doesn’t make them more or less likely to show up late; it just makes the teacher’s relationship with students better. He adds that it’s nicer when a teacher asks students to show up a bit earlier in a polite manner versus just marking them tardy for being late one time.

If a student is to walk in late while he is teaching, he doesn’t find it disrespectful as long as they do not cause a scene and distract others. He also appreciates when students go up to him after he is done talking in front of the class to tell him why they were late that day. If a student is chronically late, he will politely ask them to start showing up earlier or else he will start marking them tardy.

Poisson said that it is difficult for him to keep accepting the same excuse for lateness because then, to him, it means that the student isn’t learning something. For example, even if traffic is rough, he expects students to realize that they need to start leaving earlier in the mornings instead of just blaming it on the inevitable amount of traffic every day.

“I’m very lenient on the first period of the day, and it’s understandable that this [traffic] happens,” Poisson said. “That [level of forgiveness] goes for most things. Everybody gets a freebee. Everybody makes mistakes, and things happen.”

Even though Poisson is sympathetic about lateness, his own personal belief is that, “If you aren’t there 15 minutes early, you’re late.” He attributes this attitude to his years spent working as a laborer and operator for heavy machinery where being late would end up slowing down the rest of the crew and, ultimately, the company.

While he doesn’t enforce his own personal mantra on his students as much he does on himself, he thinks it’s worth trying to allow oneself to show up early to allow time to transition from waking up and commuting to working and learning.

In general, he finds it hard to show up at the exact time he is supposed to start working since he hasn’t had time to relax and prepare himself for the day. Each morning, he comes in early and starts his day by playing music and getting small things done like setting up his agenda before going to meetings and teaching classes.

Holtmeier, Bartsch and Anderson all understand that it’s important to show up on time for important things in life, but they appreciate when teachers don’t punish them for traffic.

“It’s actually a nice feeling [when a teacher is understanding of you being late to first period],” Holtmeier said. “You are just stressed about being late and then you walk into class and your teachers are like, ‘Yeah, that’s fine. I was stuck in the line too.’ It makes me feel understood.”