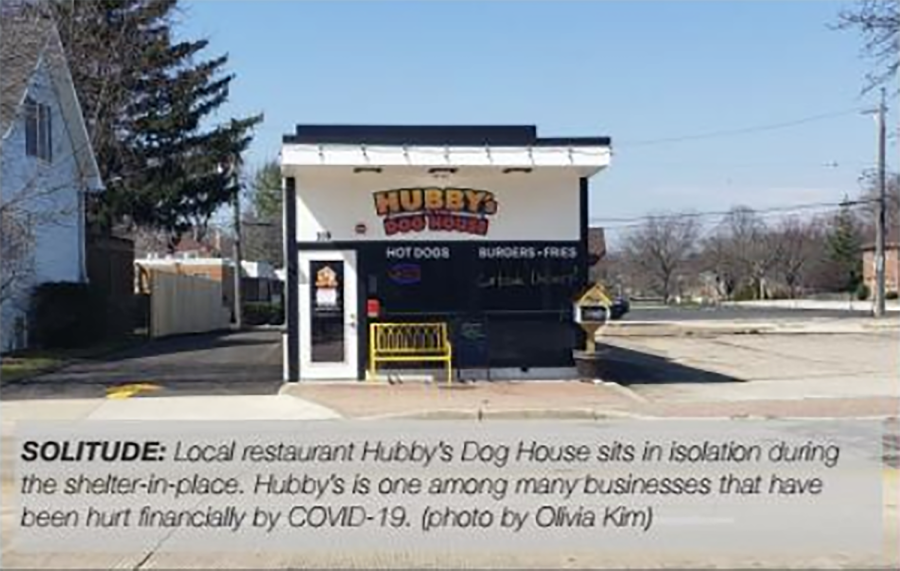 When news of the forced closure of bars and restaurants across Illinois to avoid spreading of the novel coronavirus reached owner of Mount Prospect’s Hubby’s Dog House Marci Lehnert, she was in complete and utter surprise. The closure would start on March 16 and would run indefinitely.

“Being as we’ve just opened six months ago, we were just starting to see the light at the end of the tunnel,” Lehnert said. “Being a parent, fear for taking care of my family weighs heavily on how well the restaurant does.”

On March 12, the stock market experienced its lowest mark in 30 years. According to The Washington Post, the DOW Jones Industrial Average made history by “dropping almost 2,353 points to close at 21,200.62” — equating to a 10% drop from the previous day. While this stock market drop is a faster drop than the 2008 recession, the stock market hasn’t fallen as low as it was during that recession.

“[The coronavirus outbreak] has had a tremendous effect on the economy. A lot of people are working from home or people who can’t work from home can’t work,” AP Economics teacher Christine Stanford said. “A lot of people that depend on hourly wages can’t work right now.”

After the outbreak of COVID-19, economies across the world suffered an immense hit, according to Stanford. Many companies have lost business or been forced to limit activities due to the fear of the virus spreading.

According to USA Today, dinner reservation app OpenTable released data showing that restaurant dining is down 42% in the U.S. as of March 17.

Lehnert said that she has lost thousands of dollars in revenue just due to cancellations of catering contracts — losing the opportunity to serve hundreds of people from those contracts.

While the catering business has fallen, Lehnert has only seen a slight decrease in carry-out volume. However, she noted that they are also in the slowest part of their season, so she finds it hard to tell whether it’s due to the outbreak or just fluctuation of customer flow.

After the restaurant closure, Lehnert said that since her business is mainly carry-out to begin with, not much has changed in regards to the quantity of people ordering food so far. Even though business was fine on the first day of the ban, she expects the numbers to “drastically decrease with each passing day.” In order to promote business, she includes a free hot dog coupon along with every order.

In total, however, there was a surge in sales at Hubby’s Dog House on March 16 because of customers purchasing numerous gift cards to donate to public service workers like the police and fire departments.

Lehnert still has no idea if the closing of businesses will be a good or bad thing since more people will be working from home, which could mean that more people are in the Mount Prospect area wanting to pick up food from her restaurant. However, at the same time, there is less business from commuters that get on and off the train at the nearby Metra station.

In order to reduce any possible spread of the virus the best she can, Lehnert cleans each pen after use and wipes down door knobs and handles every 10 minutes “without fail.” Ketchup bottles used to sit on the counter, but she has since removed those and put numerous hand sanitizer bottles all around the restaurant instead.

Not only has the restaurant industry been immensely impacted by the outbreak, but so has the travel industry.

After President Donald Trump announced a 30 day travel ban to several European countries, later extending the ban to Ireland and the United Kingdom, United Airlines stock dropped 13.25%, and American Airlines went down over 3.44%, according to CNBC.

Travel agent Heidi Zielke of Sentinel Travel located in Northbrook has gotten a surge in calls asking about advice on whether they should cancel their plans or not. All of her clients have cancelled their trips that were scheduled until June except one which she predicts will be cancelled.

Zielke’s salary is based on commission, meaning that she contracts with certain hotels, resorts and transportation companies to book clients in order to get a commission. So if people don’t book trips or even end up cancelling trips, she doesn’t get that revenue.

“I think that being open and honest with the clients is the best thing I can do right now,” Zielke said. “Most of the people I have booked now are regular customers, so they trust my expertise and opinion. The best thing I can do is continue to monitor [the outbreak] and tell [clients] what’s going on.”

On March 27, American Airlines announced that it would be flying only 20% of its domestic schedule and between 10% and 20% its international schedule, according to CNN. The company’s CEO Doug Parker also added that many of the planes running are only 15% full. This has led American Airlines to plan to apply for aid from the government, expecting to receive $12 billion, according to CNBC.

Even though cancelling trips could now diminish her business in the short term, Zielke thinks that it’s best for her to look out for the best interest of her clients so that they wish to go back to her in the future.

“I love traveling, I’ve been doing it all my life. I love booking trips and, personally, I love the learning experience of new destinations and sharing that information,” Zielke said. “My biggest fear is that people will be too nervous to travel again and will lose out on those travel experiences.”

Zielke has also noticed that airlines have started sanitizing planes more, but in the past, she noticed as a flight attendant that most airlines would only pick up trash. In addition to this policy, many airlines have allowed for flights to be rescheduled for little to no cost. She hopes that these policies are there to stay after the worst of the outbreak has passed.

Even though Zielke and Lehnert hope for the best after the worst of this outbreak, the present is still quite dim.

“Little ‘Ma and Pa’ shops are having to pay out of pocket and big corporations are losing millions, so it’s hurting everybody right now,” Lehnert said.

Busse Automotive in Mount Prospect was deemed an “essential” business by Governor J.B. Pritzker, and it is able to stay open through the shelter-in-place order. However, according to Service Manager Chad Busse, they saw a 65-70% decline in business immediately.

Busse not only worried about his business being closed or being considered “essential,” but still also fears that supply chains will close due to the effects of infections. To prevent spread of the virus, they decided to implement stricter and more elaborate cleaning guidelines from inside cars to shared surfaces in the facility.

“I am cautiously optimistic on our ability to bounce back once everyone is safe to work,” Busse said. “In the meantime, we are concerned with having the cash flow to make payrolls, pay bills and operate during this downturn.”

To ensure that they can make ends meet, they are meeting with a local bank to apply for assistance through the federal payroll protection plan available, which they submitted on April 3.

However, Busse thinks there will be a light at the end of the tunnel. Even though this crash has impacted the auto shop more than the 2008 recession, he believes that in comparison to the recession, once the outbreak has diminished, the economy will rebound faster.

“It’s the difference between our economy being brought to a sudden halt, versus our economy crashing,” Busse said.

Stanford also believes that the U.S. won’t be hurt by the stock market crash for long because she thinks that both the American and global economy are resilient.

However, all Stanford, Lehnert, Zielke and Busse all noted that they have never seen any outbreak like this, especially one that dealt a great hit to the economy.

“We didn’t really know about the disease and it came so fast. Nothing like this happened [as a result of the spread of swine flu]. There’s a lot of fear and unknown at this time,” Stanford said.

Even the 2008 recession didn’t have such a great impact on Lehnert. At that time, she held a corporate job working for Sears and didn’t get laid off, so her life wasn’t interrupted much. However, there is now more at stake for her because of the new business that she owns.

“If I don’t have customers, then it’s all over,” Lehernt said. “So this time it’s personal.”