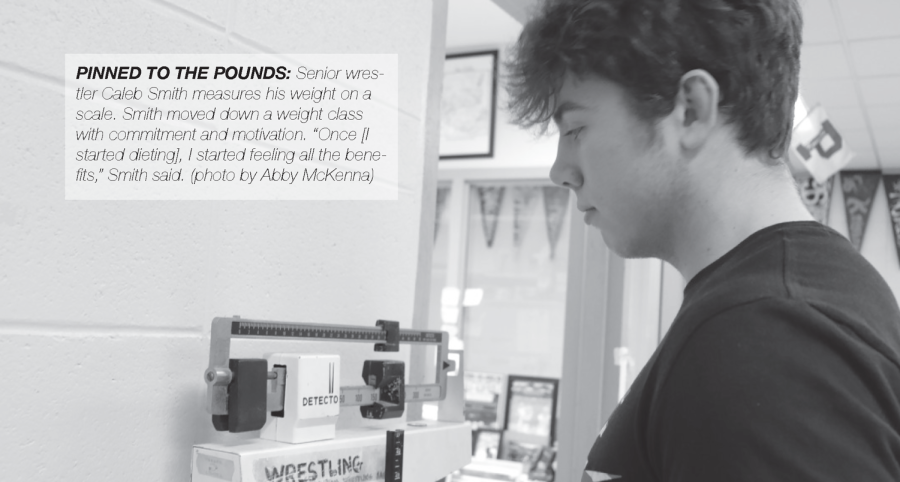 Weighing the Gains, Glory of Wrestling

With only two days before the Freestyle State Tournament for wrestling on May 4, during the spring of his junior year, senior varsity wrestler Caleb Smith decided to make the last minute decision to go down to the 195 lb weight class from his initial weight of 205 lbs.

In the days preceding the competition, he layered on sweatpants over leggings during practice, drank two protein shakes, had a normal lunch and a small snack each day and allowed himself only a glass of water after working out.

He made it to his desired weight after pushing himself through this anguish for two days straight.

“I hated [cutting weight fast]. I was miserable,” Smith said. “There’s nothing better than eating and drinking after a workout, but I didn’t get to do that. I decided that I wasn’t going to [lose weight like that] ever again.” 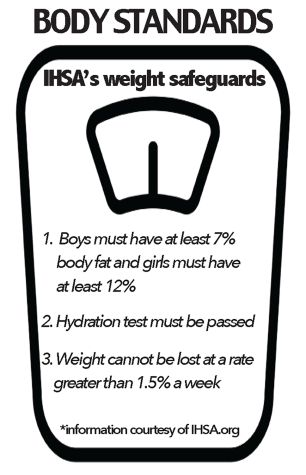 Changing weight classes is a very common for wrestlers. Many do this for strategic reasons such as balancing the number of wrestlers per each weight class on the team or adjusting to natural weight fluctuation.

Wrestlers will compete in different weight classes so that they go against athletes of a similar size and strength. Each weight class is specified by the maximum weight one can be to compete in that class.

During April of Smith’s junior year, he made the decision to go from the 220 weight class to 195 for the season. He did this after feeling that he was not as successful as he wished to be last season with a record of 26-21. He blamed the fact that he is 5’9” and was competing against larger athletes found in the 220 weight class.

Head Coach Tom Whalen believes that as a coach, he’ll never ask an athlete to change classes. However, when a wrestler is committed to changing their weight, Whalen thinks that it’s important to guide them as adults and support their decision as long as it’s healthy and reasonable.

Along with IHSA’s safeguards to make sure athletes change weights safely, Whalen makes sure that when athletes come to him with the decision to change weight classes, he helps them set up an appropriate dieting and workout plan to achieve their goal.

After practice, Smith would run a few miles and start eating healthier by eating less processed food and healthier alternatives such as chicken and rice. He also chose to improve his sleep schedule by sleeping from 10 p.m. to six a.m. every night from his previous arrangement of sleeping somewhere between midnight and 3 a.m.

“Once [I started dieting], I started feeling all the benefits; I was feeling better. I was feeling more energetic. I could run longer and faster,” Smith said. “I just got addicted to that feeling of getting things right.”

Whalen thinks that through the program, athletes have been able to find success in life outside of the sport, too, by changing their lifestyle to a healthy one. He has seen people join the program with over 40% body fat as freshmen and graduate with only 15% body fat.

Smith feels that dieting has not been extremely challenging because his motivation to lose weight is greater than the temptation to cheat. He was even able to deny himself cake on his own birthday.

“My advice to people is to find motivation, to find something to keep you going on your diet. Mine was [that] if I keep on eating right, I’m going to be a better wrestler.”

According to Whalen, no athlete in the program has failed to follow through with their decision to change weight classes because the coaches help them create reasonable goals that fall within IHSA’s limitations. IHSA doesn’t permit weight loss of over 1.5% of the athlete’s total body mass per week, wrestlers must pass a hydration test and boys must maintain a minimum of 7% body fat and girls must maintain at least 14%.

Another reason Whalen attributes to the wrestlers’ success is their commitment.

“Commitment is number one [in wrestling]. If you’re going to set your mind to something and make a goal of something, [and] you accomplish it, you’re probably not going to have regrets. You’re probably going to feel … good about meeting your goal,” Whalen said.