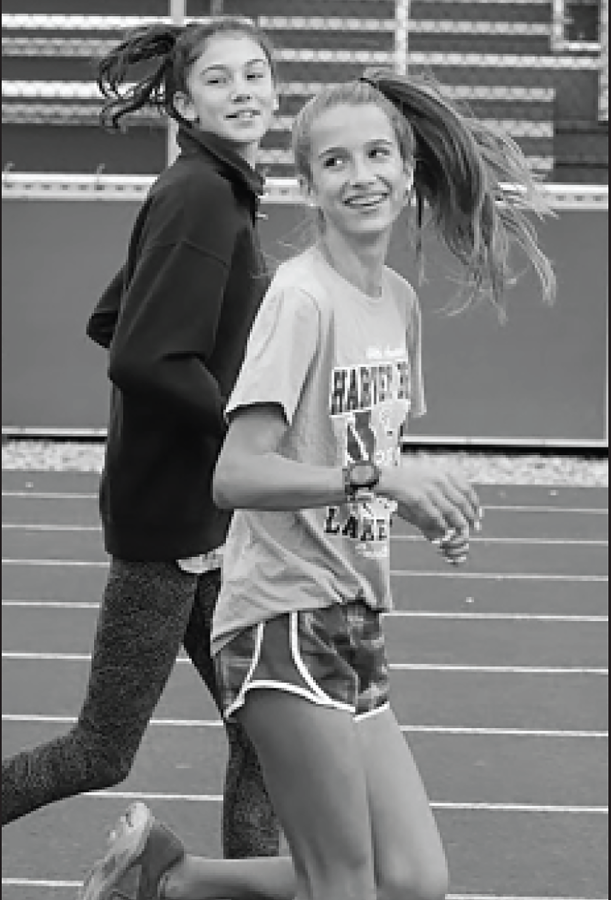 WORK: Sophomore Audrey Ginsberg (left) and Annika Erickson (right) practice for a meet. Teamwork and mentality has helped them throughout the season.

For junior Annika Erickson, the anticipation before each cross country race drives nerve-wracking fears of disappointment through her mind. Memories of a defeat from a recent race  followed her where she ran three miles in 19:34, a slower time than her best, putting her in 17th place on Oct. 1 at the MSL East Meet at Elk Grove High School.

Erickson decided that in order to perform better, she needed to escape the oppressive thought process that said she couldn’t perform better than her last race.

At the invitational in Peoria on Oct. 5, she forced herself to overcome her own mind and reversed her previously negative mindset to a positive one, which ended up driving her across the finish line at a faster time than she expected prior to the race: 17:53. This broke her previous record, placing her sixth and helped to win Prospect first place.

“If you have a bad race, it’s hard mentally knowing that you could do better,” Erickson said. “If you get negative thoughts, [it] goes downhill from there. You have to stay positive.”

The utilization of a strong mindset has resulted in the girls’ cross country team being at 5-1 this season in dual meets.

“[Mental state] is probably the largest part of our sport that people don’t recognize,” head coach Pete Wintermute said. “I’d say our sport is about 90% mental. When it gets tough out there, you need [a positive mindset] to rely back on.”

Not only has Erickson embraced an advantage in having a solid mindset, but she has also passed on this knowledge to her younger sister, freshman Hailey Erickson, who is on varsity with her for the first time.

Annika started her cross country career in sixth grade, and Hailey followed two years later when she was in sixth grade. For the three mile, Hailey has a best time of 18:32.

“Sometimes I get competitive, but it’s fun a lot of the time,” Annika said.

While Annika feels some rivalry between them, Hailey doesn’t feel quite the same sentiments.

“I don’t feel pressure to be as good as her or better, I just try to be the best that I can be,” Hailey said.

The sisters sometimes practice together with other teammates as Annika has seen Hailey’s abilities reveal great improvement.

Annika not only felt that she needed to step up this year as a guide for her sister, but also as a  leader for the team. Now, Annika stays diligent during practice and feels a pressure to pay more attention to detail in order to help guide the others through workouts. She wanted to do this in order to help strengthen the teamwork between the runners, which is one very valuable factor she feels that leads to the improvement of the team’s performance.

Sophomore varsity runner Audrey Ginsberg appreciates the close connections made on the team as well.

“[Being part of the team] is a really great experience,” Ginsberg said. “You make really close connections because you’re seeing each other through the pain, working together and pushing each other through it, knowing we can keep moving on, [which] is really important. You can always trust your teammates.”

Wintermute agrees, as he’s still close friends with many of his former cross country teammates.

The energy shared between the teammates helps drive an adrenaline rush within the runners to push them to achieve more instead of just being on edge before the race, according to Wintermute.

He remembers a former cross country runner that graduated coined the term “nervited” — meaning that before a race she would be excited and nervous at the same time. Wintermute finds it important to be able to turn that anxiety from before a race to adrenaline to help push to the finish line.

“I like how rewarding [cross country] is; you have to mentally push yourself and know that you can keep going,” Ginsberg said.

While mindset can be what drives one through a race, it can also be what determines a defeat.

“The hardest part of cross country is telling yourself that you can push harder … if you’re not positive throughout the race, then your race may not turn out the best because you know you can physically, but sometimes mentally you can’t,” Hailey said.

Ginsberg finds relief in the knowledge that she can trust her teammates and her practice when she runs.

“We always try to push each other and remind each other that we need to run for each other,” Ginsberg said. “We need to trust our training because we’ve worked so hard.”