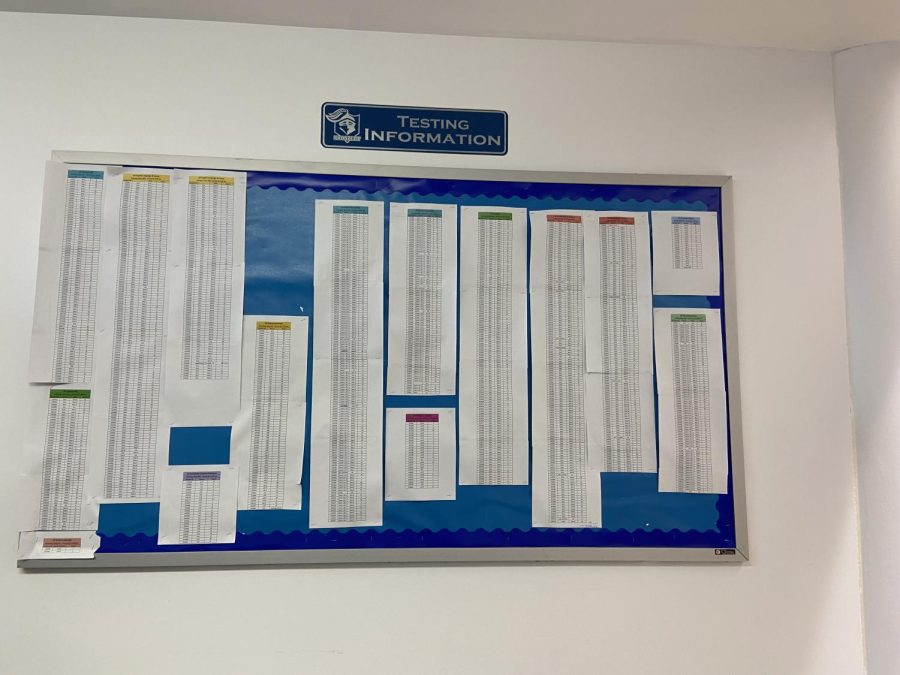 Various AP Testing seat locations are displayed in the hallway.

During the first two weeks of May, hundreds of students flock to the gyms and the KLC in order to take their Advanced Placement (AP) tests.

These yearly exams are not only a rigorous measure of how well students have mastered the content and skills of their various AP classes throughout the school year, according to the College Board, but they are also the bearer of a great amount of stress for those taking them.

While she said the exam weeks were very stressful, she also felt that the week leading up to AP testing was even worse in terms of stress because she was trying to balance studying and preparing for the tests with an already busy schedule.

Cullen was the most stressed for her AP Lang exam due to the fact that she felt less prepared for it. This was her first time taking a test that required her to write three essays in a row for over two hours, in addition to a multiple choice section, however, after taking the exam, she felt fairly confident about how she did.

“I was definitely a little nervous because I wanted to do well, and I wanted to be well prepared,” Cullen said. “On that morning, I didn’t feel as nervous since everyone else was in the same boat as me, and a lot of people [took it]. I was just excited to get the test over with.”

As far as her most difficult test, Cullen struggled with her AP Calc AB exam. Unlike her other two exams, where she knew the types of questions she was going to be asked prior to taking the test, she was given a few problems that she did not even know how to start.

“It stressed me out at first,” Cullen said, “but then I was like, you just gotta keep moving on because you’re on a time crunch.”

Cullen feels that the reason why students worry so much for AP exams is because they have put in so much work throughout the year, so they want to be able to show all that they have learned.

After completing all of her AP exams, Cullen enjoyed not feeling the stress anymore.

“It felt great because I just had a lot of pressure on myself throughout the whole week to do well, and then after I kind of just decompressed and me and my friends got tacos,” Cullen said.