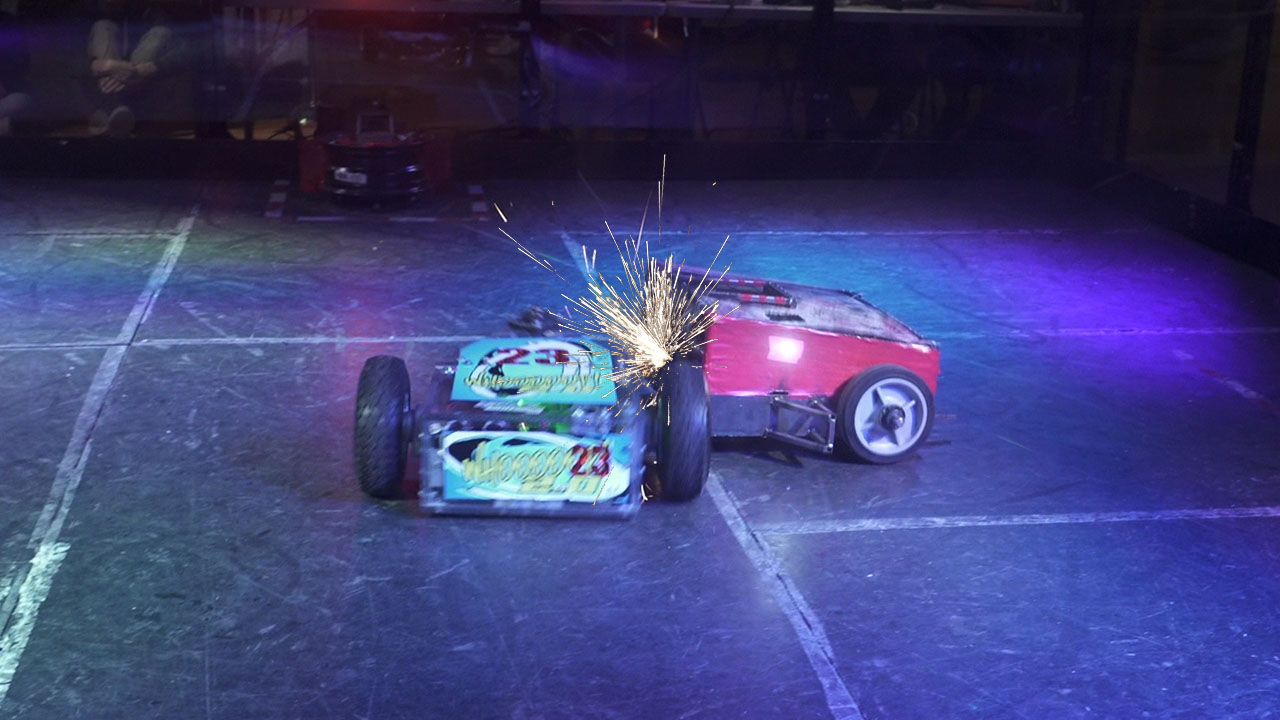 This year’s District 214’s annual Robot Rumble was hosted at John Hersey High School. The competition of teams asked to bring their robots was composed of 38 teams from 13  schools: all of the D214 schools, D211 schools and additional invitees. During the Robot Rumble robots fight in a one-on-one fight until one can no longer function or until two minutes has elapsed. Then a panel of three judges determine the winner based on aggressiveness and damage inflicted on the robots.

For the last two years, this event was hosted at Prospect. Last year, however, it took on an alternative form. Rather than a fight, it was a race in the PHS parking lot. The year prior was in the field house.

PHS  brought three teams to the rumble this year, after months of designing, engineering and manufacturing the final product. One bot being a wedge bot and the another with a vertical spinner.

Junior Shane Thomas has been a part of the Prospect robotics team all three years of his high school career, though he doesn’t really count last year because he was able to participate a lot due to COVID-19.

This year, Thomas was on the team that made the wedge bot, which as Thomas explained is basically just a shell; it doesn’t have a weapon. The main purpose is to push the opponent around.

The build season for Thomas was a little hectic and went off the plane a few times.

“We could have done things a little more efficiently … It was a little disorganized but we finished [the robot] at the last minute,” Thomas said.

Despite the designing and building setbacks, Thomas’s team did exceptionally well and got farther than the other PHS teams. The only mistake made was a battery wasn’t fully plugged and came undone during a match.

“It was a mistake we made,” Thomas said. “We learned not to do that next time, but other than that did pretty good.”

Thomas was the driver for his team and was at the forefront of the success of his team. Despite building delays, Thomas didn’t get a ton of driving practice, but he still felt he did a good job during the matches.

“There actually was a match where I was able to drive another bot into these moving screws in the ring and knock their weapon completely off,” Thomas said with a smile. “So [I’m] pretty proud, if I do say so myself.”

After not being able to really do any building for last year’s race robot, to be back in the pits and the arena for Thomas was exciting and a little nerve wracking from him to compete in a full out competition.

“It was a little stressful … That amount of people that fits in the stands and stuff, but it was refreshing to actually be able to do robot cage combat,” Thomas said.

Thomas is on the district robotics team as well but he enjoyed the fast pace of the robot rumble and loves the community that comes together throughout the competition.

Thomas shared about helping another team with fixing their bot after a difficult match and loved how even though everyone was competing against one another, everyone came together to help out the other teams.

Overall, Thomas was thrilled with how the competition went and is ready to be back again next year for another competition. Thomas can’t wait to be back and feel the excitement, joy and rush of the robot rumble.

“[The competition is] adrenaline inducing in multiple ways, you’ve got the robots fighting, you’ve got stands of people but it feels good … It’s really uplifting inside … It just puts you in a good mood,” Thomas said.