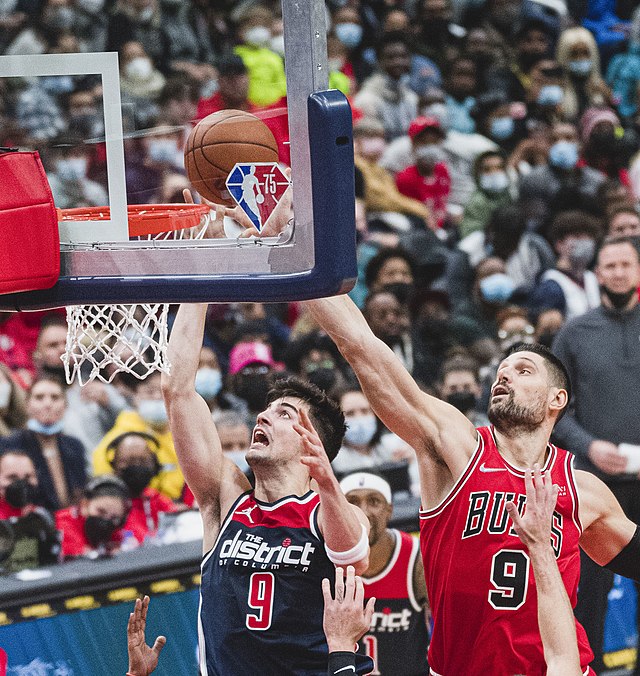 NBA playoff team back in Chicago

New Years Eve 2021, DeMar DeRozan taking down time, down by 1, 1.2 seconds left on the clock. He takes it up just beyond the 3 point line, throws up a shot on his left foot with two defenders on him and it goes in for the buzzer beater. The Bulls win 108-106, less than 24 hours later, on first day of 2022 in Washington, White tosses it into DeRozan in the corner, gets one defender to miss, then with one guy draped on him and the other with his back hand up DeRozan throws up a hail mary with 0.3 left and DeRozan gets the 3 ball to go. The Bulls win 120-119, with the win streak staying alive thanks to back to back buzzer beaters by DeRozan in back to back games.

With wins like that, Bulls fans are excited to see a winning team for the first time in years.

“I just like how it finally feels like they are moving in the right direction and it feels like before this season they were really content to be mediocre and it finally felt like they were making some moves to be a good team,” English Teacher TJ Garms said.

It’s been 5 years since the Bulls have had a team make the playoffs, and Bulls fans have been happy to see this happen once again.

Garms, who is a freshman Boys basketball coach, has been a Bulls fan his entire life, but doesn’t really remember the first 3 peat because he was too young, but remembers watching the second 3 peat and after that, became a casual watcher. Once the NBA went into their bubble season, he really started watching the NBA more. Garms, who has been coaching for 11 years, thinks that the Bulls are moving in the right direction in terms of who they are signing like Lonzo Ball and DeMar DeRozen, and what they are presenting to become the next big team. However they couldn’t shoot to save their lives this season, sitting third in the regular season shooting 48%, but sitting last in the playoffs shooting 40.4% with the next worst team, the Atlanta Hawks, shooting 44.0%. Garms also thinks that the Bulls could need more talent.

“It seems at times they really got beat up inside so maybe they need to get more size,” Garms said.

The Bulls Big inside guys this past season were Nikola Vucevic, Patrick Williams, Triston Thompson, and Javonte Green, letting up 211 total points in the paint through 5 playoff games. In the past 10 years, the Bulls have made the playoffs 5 times, making it past the first round twice and having a playoff win percentage of 47.2%. Bulls fans of the past had MJ, and the Bulls may never find someone like that again, who led the team to a 71.8% playoff win percentage in his 13 year Bulls career bringing home 6 championships going into the NBA Hall of Fame in 2009.

Bulls fans now have DeRozan to look forward to, as he led the team in almost every category, with even leading the league in 2pt- field goals made with 724, and ranked 15th in free throw shooting 87.6%, and being second in scoring with 2118 points and even got an MVP vote.

Freshman Casey Cory has been a Bulls fan since he was three years old. Cory thinks that the Bulls should get rid of some players who aren’t really “showing up” and instead opt for better players.

“They need to get rid of some big contracts like [Nikola] Vucevic because he doesn’t fit his role well,” Cory said.

Vucevic has 2 years left on his contract with $46 million guaranteed. Cory believes the Bulls just need bigger guys, rebounders, interior finishers, and defense such as someone like Rudy Gobert who is really good in the paint who averaged 11 rebounds a game and 2.1 blocks per game while shooting 75.4% inside the paint. The last time the Bulls had these issues were just after Jordan left, with the Bulls not being able to win or make a playoff series for 8 years.

“Assuming that Zach Lavine re-signs with the Bulls, I’m most looking forward to seeing what the team looks like with better injury luck,” Garms said. “I think Bulls players missed something like 275 games due to injuries this year, and I would like to see what they look like with Lonzo Ball, Lavine, DeMar DeRozan, and Patrick Williams playing together more consistently.”

Check out the bracket predictions by the writers: https://www.nba.com/playoffs/2022