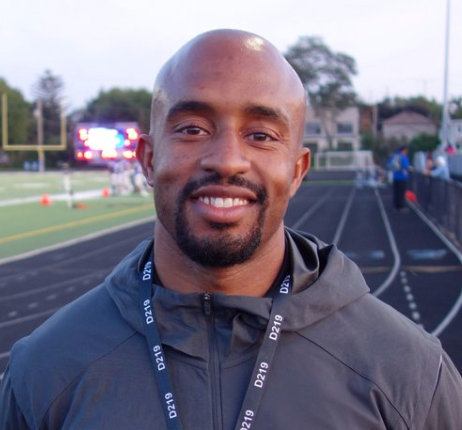 Omar Alebiosu has had a life built around sports. When he was younger he played football and wrestling. In high school, at Niles North, Alebiosu turned into a varsity wrestler. A few years later, he wrestled on a club team at Florida State University.

After college, Alebiosu started his education debut in 2010 at Dewey Elementary school. His next jobs consisted of being a physical education teacher, assistant athletic director and director of physical welfare, as well as some coaching sprinkled in there.

More recently, Alebiosu said that Principal Greg Minter recruited him for an athletic director position here at Prospect. Alebiosu stated how much the administration made him feel supported.

“Mirandola, Minter, [and] Debouef, have all been instrumental in making me feel comfortable that this is the right decision [to work at prospect],” Alebiosu said.

He explained further that he felt “welcomed … with open arms” to be a part of the prospect team. One of the main factors for Alebiosu joining the staff was how close the staff and students are at PHS. Prospect’s student section state title was something that he took seriously when considering the job.

“I feel really excited about it [the job],” he said. “I haven’t seen a school … that has that much care and love for all programs.”

Alebiosu is looking forward to gaining the experience needed for the job, but he also understands that experience comes with time.

In addition, Alebiosu said he is striving to build close relationships with students. He said you might see him around at local places like Chipotle or at Andy’s Frozen Custard.

His main goal is to be recognized in and around the PHS community. He wants to be an established member of the school, and finds it extremely rewarding when he can help others. For example, he said letters of recommendations, and job references are just a few things he would love to be a part of.

Ultimately, Alebiosu wants to “foster lifelong relationships” with students. As he put it, his mission is to guide people.