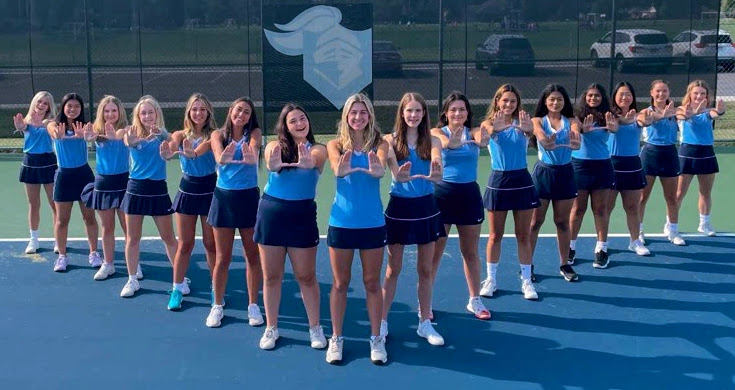 Representing: the girls’ varsity tennis team lines up to show their commitment to the game. The girls are excited to get back onto the court and perform better than last year. (Photo courtesy of Mike McColaugh).

Representing: the girls’ varsity tennis team lines up to show their commitment to the game. The girls are excited to get back onto the court and perform better than last year. (Photo courtesy of Mike McColaugh).

After most matches, the girls’ varsity tennis team goes out to get food and bond. They frequently visit Buffalo Wild Wings, and no matter how they play, the girls always support and check-in with each other. Sophomore Kara Pescaru, who is first singles on the lineup, always feels encouraged by her teammates.

“We celebrate the little things together,” Pescaru said.

The little things range from birthdays to fun Friday practices in which the seniors organize games and themes for everyone. Their past themes have been pink out and blue out.

The leadership of the seniors is appreciated by head coach and math teacher Mike McColaugh. He notices the strong relationship between his players when he sees them playing.

McColaugh played tennis growing up, and he followed in his father’s footsteps by becoming head varsity coach 12 years ago.

When asked what his favorite part of coaching is, McColaugh said: “It’s the kids.”

Pescaru, who made first varsity singles last year as well, started playing tennis when she was seven. Initially, the sport was something recreational that she didn’t take seriously, but as she grew older she fell more and more in love with it. She’s played at two previous clubs, and currently practices off-season at River Trails Tennis Center.

Hitting the ball helps Pescaru relax after the school day, and it allows her to clear her mind. If she had a hard math test, she’d come onto the court to release tension.

“Whatever I was feeling, if I went on the court I felt better after,” Pescaru said.

As a freshman, Pescaru was initially nervous to be around so many upperclassmen; however, she became more comfortable on the team and her tennis skills have grown tremendously since last year.

McColaugh notices her growth and skills as a tennis player, and her sportsmanship with the other girls.

“She has a great balance between being very nice and sweet off the court… and then on the court she flips that switch and is very competitive and very driven and very tough,” McColaugh said.

Looking forward to this season, McColaugh’s three goals for the team are: to improve their tennis skills, to win the East Division and to have fun at the same time.

After losing the final match at last year’s state meet, Pescaru’s goals are similar: to go to state and to know she played to the best of her ability.

“I don’t want to have any regrets, I just want to know that I played my best,” Pescaru said.