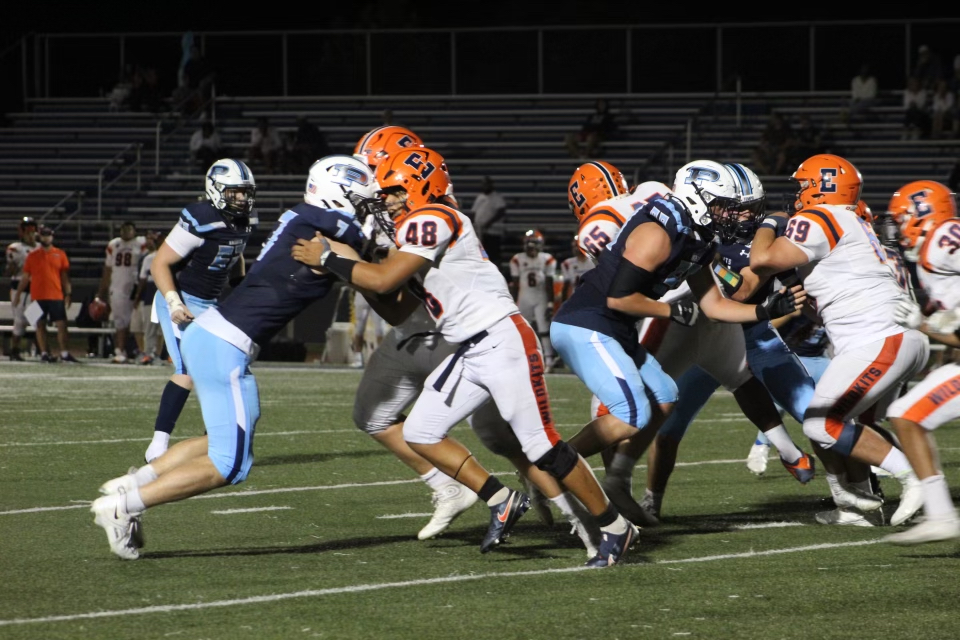 After winning their first two games by over 30 points and scoring over 50 in both contests, the 2-0 Knights found themselves tied at 14 midway through the 4th quarter against the 1-1 Evanston Wildkits.

“We need to get used to being in these situations, especially in these next two weeks when we’ll be playing these big teams,” senior defender Connor Mitchell said.

The Knights defense got two quick stops, and eventually the offense was able to punch in a game winning 24-yard field goal by Gavin Flanegan with less than three minutes remaining.

“We knew this would happen at some point where the defense bails out the O [offense] and we saw that happen tonight,” head coach Dan Debouf said.

Evanston was averaging 35 points headed into Friday’s game, including a 53 point outburst week one. They only managed to get 14 against the Knights’ defense.

“We were just flying around having fun, and that’s all you gotta do,” Mitchell said. “Attack, swarm, eleven heads to the ball every time, that’s how you do it.”

It wasn’t all bad on offense though. Senior quarterback Brad Vernisiel threw two touchdown passes, including a 70-yard touchdown to wide receiver Frank Covey, who made multiple defenders miss on his way to the end zone.

Debouf sees this game as a learning experience for his team. The Knights head into their first road game of the season next week, against the 2-1 Maine South Hawks.

“It’s always nice when you can get a win and still learn from a close game like that, as opposed to learning from a loss,” Debouf said. “There’s a lot of things for us to clean up going into next week, but we needed a true test like this to really see where we’re at, and the biggest thing was our backbone at the end of the game.”

With a chance to continue the winning streak on Thursday night against a talented Main South team, as well as a rivalry game against currently undefeated Hersey looming, Mitchell remains confident.

“We just need to focus up. When we’re at our best, nobody’s gonna beat us,” Mitchell said.