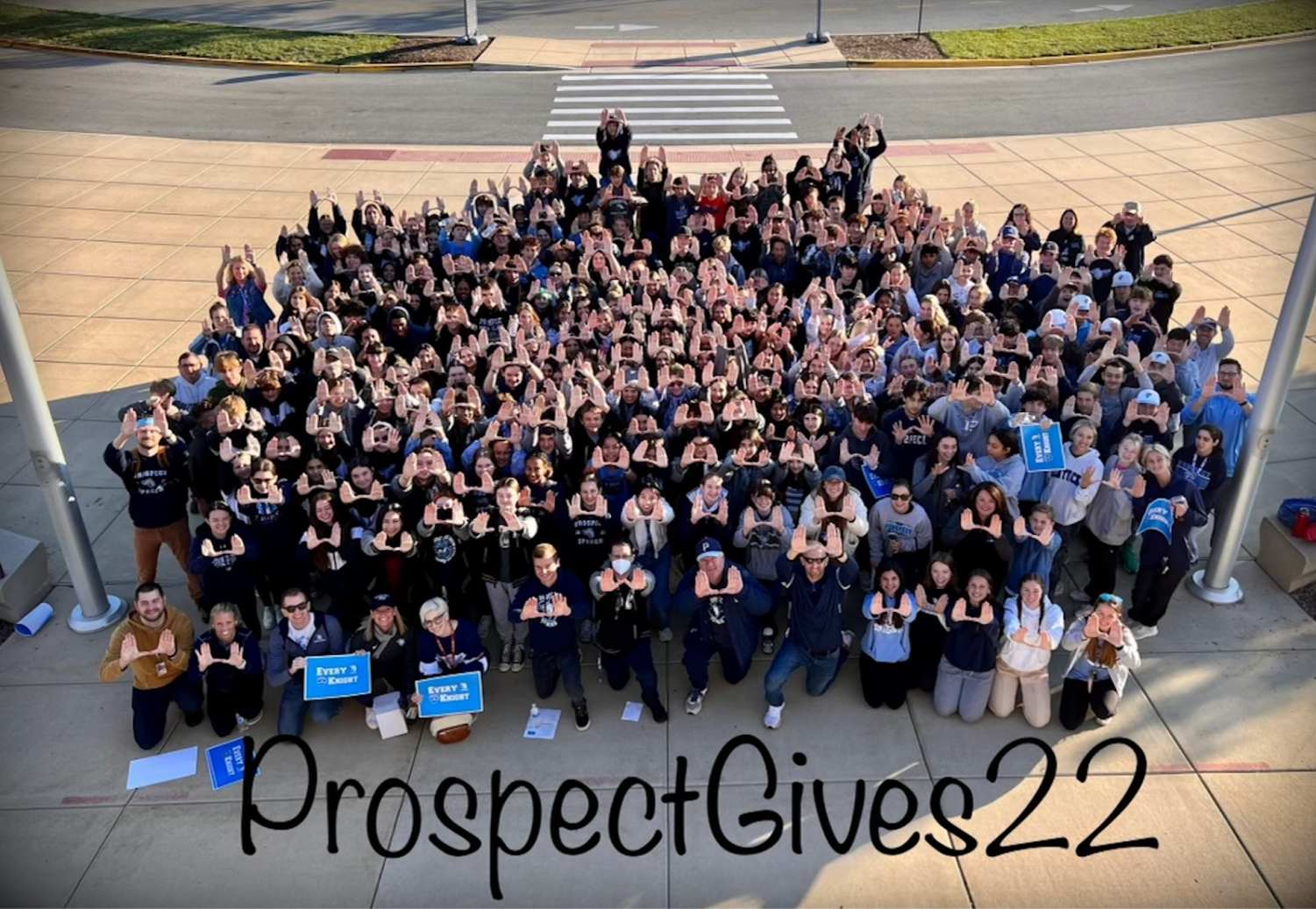 All students who participated in Prospect Gives Back gather for a photo. (Photo courtesy Nicole Stoltz)

All students who participated in Prospect Gives Back gather for a photo. (Photo courtesy Nicole Stoltz)

There were cross country team members situated at each of the obstacles, but Balenda was in the heat of the race, running alongside the kids and cheering them on as they faced each challenge: running as the kids put their footwork to the test as they ran through a jumble of tires on the ground; cheering as they climbed a rope to slide back down; supporting them all across a giant Slip N’ Slide, a swamp that was meant to be waded through and ropes they had to crawl beneath, through a trench of water.

At the end of this extensive course, Balenda recalls one kid running up to their father, victorious. Congratulating his child, the dad said, “We did it son.”

Balenda says this interaction was the best thing he saw all weekend.

“I just smiled,” Balenda said. “I was able to spread happiness to other people. I really want to keep doing that and just hope one day that everyone has that smile on their face.”

Prospect Gives Back — a service event that seamlessly meshes PHS student’s volunteer work with local organizations — ran smoothly on Oct. 1, bringing smiles to people’s faces across the community. The turnout was comparable to last year; there were 17 community partnerships across roughly 250 students participating. A tradition of six years, Prospect Gives Back highlights service within the PHS culture, according to Assistant Principal for Student Activities Frank Mirandola.

“That’s always one of my favorite days of the year,” Mirandola said. “It’s not about us; it’s about serving others. I think that’s one of the things I’m most proud about with the Prospect culture. We do a lot of fun things, and have a lot of fun within our building, but it’s great to know that it doesn’t end at the gates of our school; we can continue on and share that culture with others.”

This culture was on full display, as clusters of student organizations served local community initiatives. There are always a variety of events, from the River Trails obstacle course, to planting mums or wrapping silverware for an upcoming event. Mirandola says he wants community members to know that it’s Prospect students doing this work, which is the reason participants are encouraged to sport their PHS gear.

“Really what we want people to know is that Prospect High School has an amazing culture of school spirit and inclusion. But also, a part of that culture is the culture of serving others … By providing these opportunities — and making it a fun experience —  you’re hopefully sparking that excitement and curiosity of serving in the future. That’s why it’s so important.”

This excitement to serve others comes to a peak at the send-off, which Mirandola says is the reason the event is organized to meet at a communal location, rather than individual sites.

“They are excited to be there, excited to be around their friends,” Mirandola said. “… You know, it’s funny because you have people coming to school at 7 o’ clock in the morning — that’s earlier than they’re there on a Friday. And they’re there to serve others.”

Balenda, who participated in the event for the second time this year, loves how Prospect Gives Back brings him closer with his teammates through service.

Balenda remembers last year, where Prospect Gives Back specifically brought him closer with the seniors on the team. He says that these connections lasted beyond the event into the rest of the season, the track season, into the summer and beyond. He has created many more memories with these former teammates — from traveling to different states, going to the state track meet together or hanging out over the summer — and still keeps in contact with many of them as they start their post-high school journeys.

Balenda says he was happy to be back at River Trails this year to nurture more strong relationships with teammates and to bring enthusiasm to the obstacle course for all the kids participating.

“I think that’s one thing that’s really good about our team,” Balenda said. “We are all so close together; we all hype each other up; we all want the best for each other. We brought that energy to the course and cheered everyone on … I feel like the energy we bring, as a team, is not comparable to anywhere else.”

He feels like this infectious energy is felt by teammates and community members alike. In fact, many parents of kids running the obstacle course walked up to Balenda and his teammates to thank them for their hard work.

“They were saying, ‘Man, you guys are such a good group of guys,’” Balenda said. “I feel like that really shows that our team is super special; it’s super heartwarming hearing these compliments … it’s just so genuine. We want to continue that positivity: if we give, I hope they give [too] and it spreads like this.”

Additionally, Mirandola enjoys seeing traces of the event spread throughout the community. The dance team, he says, puts up “EveryKnight” signs in local business’ windows which he thinks demonstrates PHS’s involvement in the community.

“It definitely helps create that small-town feel, like we’re all fighting the same fight, and that is about creating an amazing community,” Mirandola said. “The school is a big part of that community, but we are not operating in a silo by ourselves. There’s a lot of great things and organizations, and it’s important for everyone to work together and see themselves as part of the larger story of Arlington Heights and Mount Prospect.”

Being a part of that larger story is key, Mirandola said. Prospect Gives Back shows appreciation to the community through service.

“If you … are always taking, but never giving back or serving others, it’s a very one-sided or transactional relationship with our community,” Mirandola said. “We want to make sure we demonstrate reciprocity, but also we want our students to realize there’s a lot to be gained by serving others, not just being the recipient of other’s service.”

Seeing the happiness on the kids’ faces throughout the day of Prospect Gives Back has shown Balenda firsthand the joys of service.

“I think it’s something really special,” Balenda said. “… I feel that no matter where you go, it brings me happiness to help people out. When you’re helping people out, I feel like those bonds with the group you’re with brings so much joy to everyone. You realize, ‘Wow, we’re helping so many people out right now.’ After the moment, I’m just like, “Wow, I’m happy I did that.’”