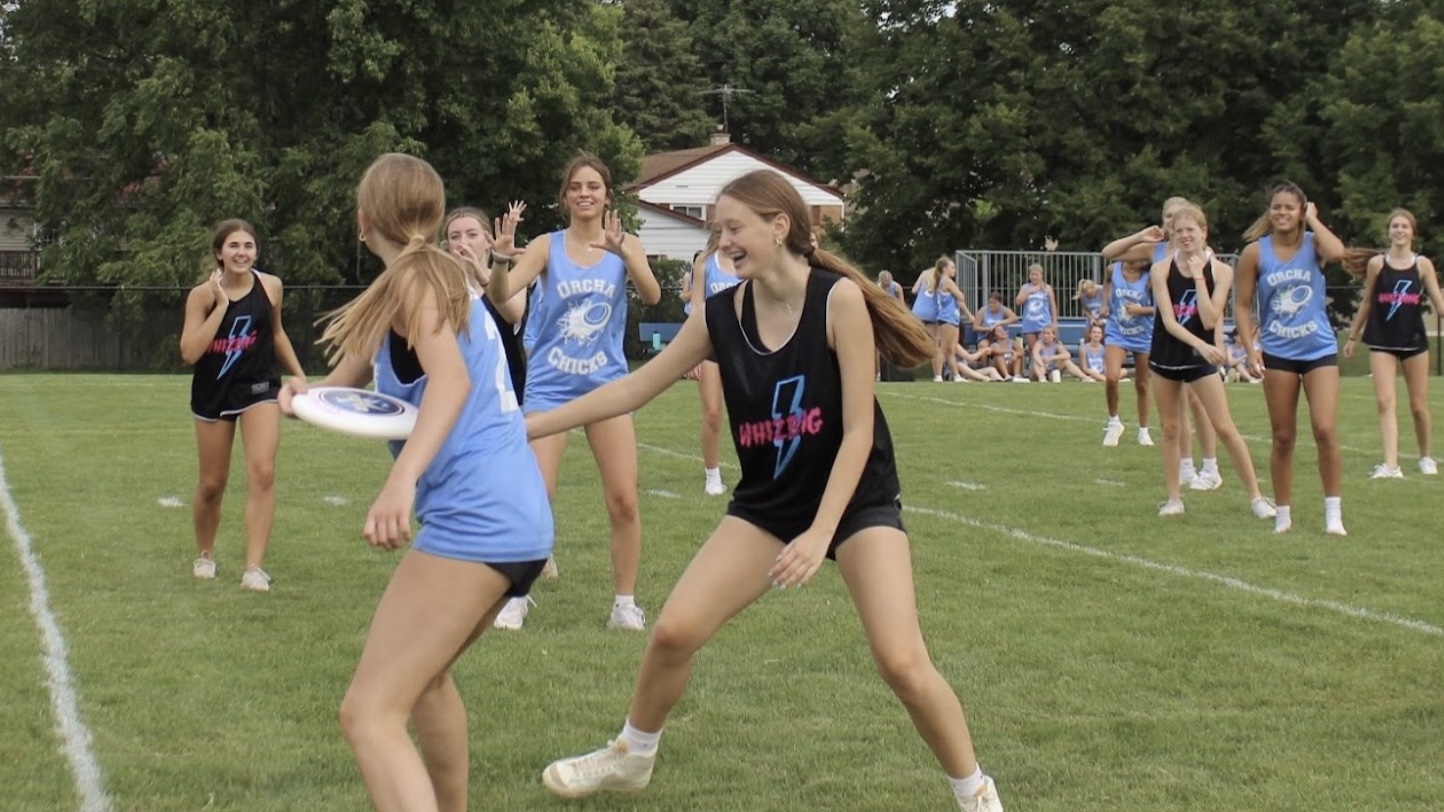 An Orcha Chicks player looks to pass to her teammate while the Whizbang player defends her. (Photo by Ella Mitchell)

An Orcha Chicks player looks to pass to her teammate while the Whizbang player defends her. (Photo by Ella Mitchell)

Just a couple hours before every football game starts each Friday, Ultimate Frisbee Club is held at Melas. Those boring hours waiting for football to start gets put into use on the fields. An exciting club that started with 24 students in 2002, has now grown to include around 300 students.

John Camardella, world religions teacher, started this club. Camardella played basketball at Illinois Wesleyan, and throughout his off season, he played ultimate frisbee to stay in shape and have fun.

“The funny part is the students had no clue what they were doing,” said Camardella.

He first started out with 24 eager students that wanted to get to know the sport. Ultimate frisbee, as Camardella describes it, is a combination of soccer, basketball, and football with a frisbee. The original field before moving to Melas is where the pool is now every Friday, a rush of students would flock the field to play ultimate frisbee. Each team gets to play four games every Friday and teams battle for the win.

The most exciting part about ultimate frisbee is putting together the teams, jerseys, and team names. Students love joining and brainstorming silly team names like Cowgirls, Zappies, Orbit, Disc Chicks, Green Onions, and many more. This year, sophomore Olivia Quinn joined ultimate frisbee. She wasn’t planning on joining but her friends convinced her to try something new. Whizbang, a team name that came from last year, was the team Quinn was on this season.

“Walking into it, I was so nervous. I had no clue what I was walking into,” said Quinn.

Quinn wasn’t really expecting the club to be a big deal. Getting on the field and realizing how many students actually show up was a huge shock to her. Ultimate frisbee is not just a random club. After two decades of it being at Prospect, it has become much more competitive than that. Teams work hard to get to the top and be the best leading into playoffs. A medal and championship trophy is all a team wishes for by the end of the season.

It helps to be athletic in this sport, but, in the end, it comes down to skill. Throwing the frisbee and having good aim is a big part of this sport. For Quinn, many of the skills came easy and the game became all the more fun. Different teams have won over the years even the band team winning many times.

Playoffs ran at George Gattas on October 11th, 2022. Rain or shine, Camardella knew the playoffs were gonna continue if there would be no lightning. The day of playoffs was very gloomy and students played in the cold rain.

Zappies won the men’s division with a huge win. Zappies had a total of 15 people on their team. They went against the Velvet Tacos for the championship win and the score came out to be 10 to zero.

The excitement and hard work paid off for these two teams. Ultimate frisbee has clearly made its mark on Prospect, becoming more popular. Camardella hopes to grow the club and welcome anyone who wants to have something fun to do before football games every Friday.

“I loved just having fun with my friends and also trying a new sport,” Quinn said.