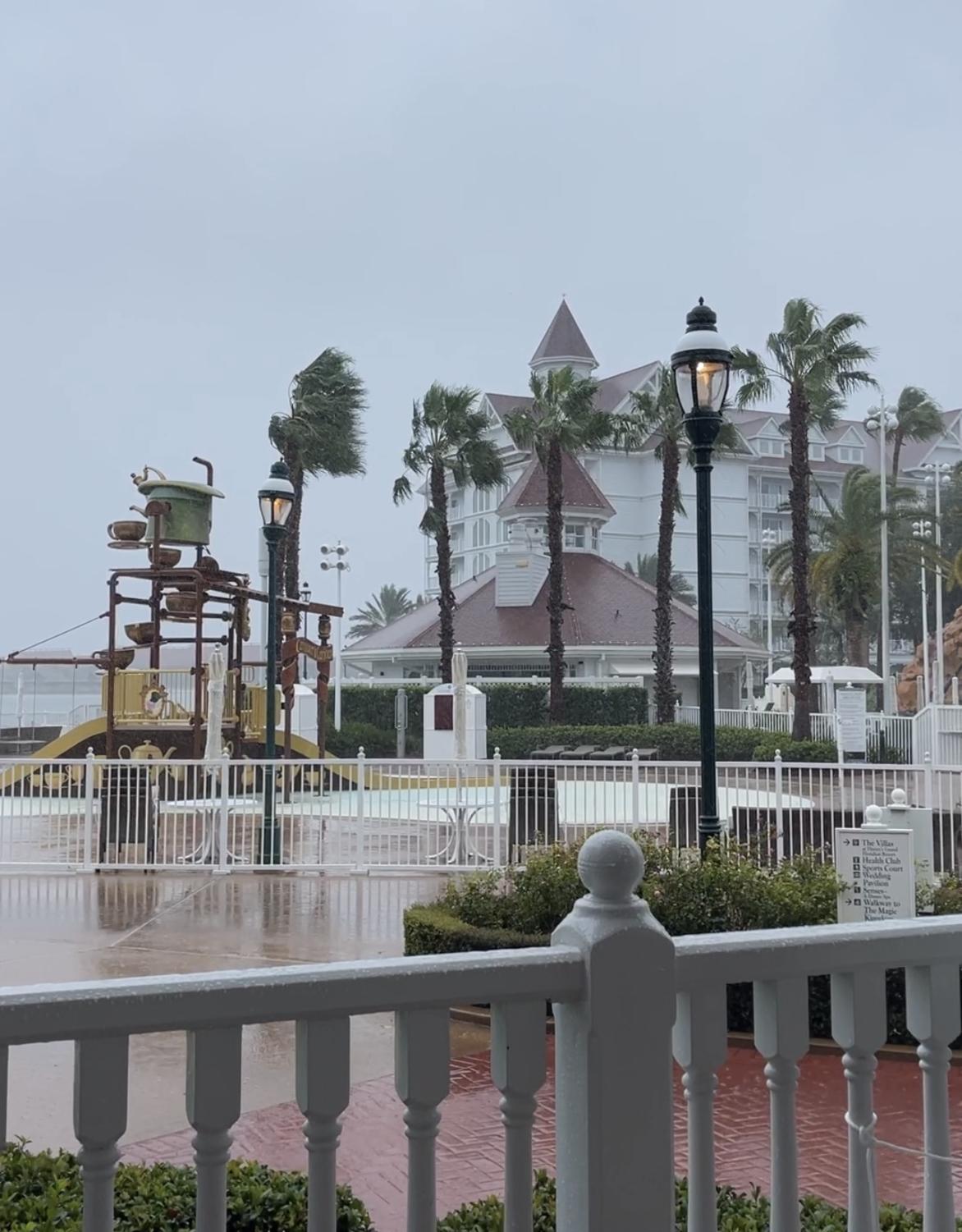 Wind and rain come down hard at the Walt Disney World resort during Hurricane Ian. (Photo by Mollie Kearns)

Wind and rain come down hard at the Walt Disney World resort during Hurricane Ian. (Photo by Mollie Kearns)

Sitting in my hotel room at Disney’s Grand Floridian Resort & Spa, AirPods tucked in my ears as Taylor Swift’s cover of Earth, Wind and Fire’s “September” came on. The first line rang clearly and she sang: “Do you remember, the 28th night of September.”

Well, I most certainly do. The 28th night of September was my first hurricane.

Originally, the plan was simple: head to Walt Disney World (WDW) in Orlando, Fla, for my mom’s Disney Travel Agent conference with two other friends from Saturday, Sept. 24, to Wednesday, Sept. 28. We were going to make our wallets cry at Disney Springs gift shops (who doesn’t love rainbow confetti Minnie Mouse ears?), walk around in pure awe at the Halloween decorated theme parks and scream at the top of our lungs on Tower of Terror. As a self-proclaimed Disney Parks fanatic since day one, it sounded like the perfect trip.

Saturday, Sept. 24: Off to see the main mouse

The day we were due to depart from home, I came home from my weightlifting practice in Grayslake and sat anxiously on the couch with my mom. All I wanted to do was hop on the plane and see sights of palm trees and a castle fit for royals. My mind quickly shifted back to reality when the anchor on ABC 7 mentioned a hurricane named Ian nearing Florida. We were a little paranoid about the possible threat, but decided to continue to monitor the weather as hurricanes could be unpredictable; one minute it could be labeled as disastrous and the next it could be announced it would fizzle out into just another ordinary rain storm.

Everything seemed completely normal. We spent all day at the theme parks, even attending Mickey’s Not-So-Scary Halloween Party on Sunday night. In typical Disney fashion, we returned to our hotel room with very sore feet, but excitement filled to the brim to go back to the parks the next day.

Despite the perceived normalcy, in preparation for the storm coming our way, my mom used InstaCart to deliver groceries to our resort. This included a variety of snacks like cheese, cases of water and Jesus candles in case the power went out. (According to my mom, these were the only big candles they had as the stubby scented ones would burn out. #LifeHacksWithMom).

It may have seemed excessive, but being from the northwest suburbs of Chicago we’re used to snow, not hurricanes.

Things started to feel “real” when Disney announced that they would be closing their six theme parks, as well as Disney Springs, from Wednesday to Thursday. The Disney parks in Orlando have only closed around eight times over the course of 50 years. On top of that, the Orlando International Airport (MCO) announced they would be closing the airport on Wednesday at 10:30 a.m.

Then, the reality of the shutdown hit me full force: the hurricane watch alert on my phone buzzed on the bus from Hollywood Studios to the Grand Floridian on Tuesday late afternoon. Looking around, it was pretty scary to hear the chorus of alarms going off on all guests’ phones.

In response, my mom had decided to move our flight from Wednesday to Tuesday in hopes of flying out before the storm hit Orange County and areas near Orlando. Unfortunately, those hopes were crushed when we received a “canceled” notice 10 minutes before our driver came to pick us up.

Wednesday, Sept. 28: Preparing for the worst

Time to move to Plan B: drive to Atlanta and catch a plane. Yeah, that plan was also crushed when we woke up on Wednesday morning and heard meteorologist Brian Shields (aka my new best friend after listening to him on the TV for four days straight) say we needed to be in a safe space by 9 a.m., including staying off of the roads due to tornado warnings. Not that I was enthusiastic to be in a hotel for the duration of a hurricane, but I knew staying put was the safest option. Besides, who doesn’t want a few extra days at Disney?

Alright, now time to try Plan C: my mom went to see if she could rent a car to drive the six hours to the Atlanta airport, but the rental center was vacant of employees who decided to not come into work because of the storm, but abundant of other guests wanting to secure a vehicle as well.

With our only option to stay put, we paraded over to the Grand Floridian lobby and called dibs on a table by an outlet. A little bit later Winnie the Pooh, Tigger, Piglet and Eeyore made appearances, making their way through the lobby to interact and pose for pictures with guests. Throughout the day, the hurricane ride out team, composed of cast members at Disney, went through an agenda of activities such as Disney trivia, a game of finish the Disney lyric and many dance parties to keep guests of all ages entertained. Having these activities throughout the day lightened the mood as everyone was uncertain of how things would look in the hours to come.

This distraction was much needed. I’ll be the first to admit that I don’t like thunderstorms, so the idea of a hurricane coming right through the county we were staying in made my stomach twist in knots. That said, having the option to spend the day in the spacious lobby took my mind off of it.

Looking back, I now have a collection of coloring pages that I worked on during the day to keep occupied; it could probably serve as a great art portfolio. My two sidekicks and I had also made friends with many of the cast members working in the resort during that time, as they often checked in on our table to see if we needed anything.

Thursday, Sept. 29: Journey to the resort next door

After falling asleep to a movie on Disney+, it turns out that I had slept through the whole storm over the course of Wednesday night into early Thursday morning. By the time Ian had reached central Florida, it had been downgraded to a tropical storm. With little visible damage to Disney resorts other than a few fallen trees and scattered debris, we were able to venture out to Disney’s Polynesian Resort. Since we were cooped up in the same place the day prior, it was nice to have something other than flatbreads for lunch. While eating my Polynesian inspired noodles and Dole Whip (which might I add is delicious), we caught glimpses of Lilo and Stitch throughout the late afternoon.

We also were able to take an Uber over to Disney’s Contemporary Resort, and hopping from resort to resort was another excuse for me to buy the WDW 50th Anniversary sweatshirt I had been eyeing. For those who couldn’t already tell, gift shops are a very dangerous place for me.

On Friday, the Disney Parks had opened back up through a phased reopening, and we were lucky enough to attend yet another Halloween party at Magic Kingdom that night. As weird as it sounds, the return of typical Florida weather made it seem like there was no trace of a natural disaster just 24 hours prior.

Unfortunately, many areas and families in Florida weren’t as lucky as we were. According to USA Today, more than 2.6 million homes and businesses were without power on Sept. 29.

Even at Universal Studios, 20 minutes away from Disney property where we were staying, there was serious flooding and even a hole in the side of the Jurassic Park River Adventure ride. A bit further out, Fort Myers and Sanibel, among other cities near the Florida coast, were left destroyed by Ian. According to an article by CNN, as of Oct. 5, 109 people have been killed as a result of Ian.

Even with the tragedy surrounding what is left of these cities, there are many options to help out people now in need. Those willing can make a donation to the Florida Disaster Fund, which distributes funds to service organizations that go to individuals in communities affected through disaster response and recovery, which can be found on VolunteerFlorida.org. Additionally, the Global Empowerment Mission (GEM) has set up a base in Fort Myers where they are able to deliver aid through semi trucks carrying relief supplies from companies such as Amazon.

I am very grateful that I, along with my mom and two friends, were able to return home safely. Disney did an ample job keeping their guests safe throughout the course of the week; for those like myself, who aren’t fully hurricane certified, it was an added feeling of security.

Taylor Swift may remember Sept. 28 because of her relationship with Joe Alwyn (#CoupleGoals), others may remember it as being the background song for September photo dumps on TikTok, but I’ll always remember it as the day of my first ever hurricane in the most magical place on Earth. 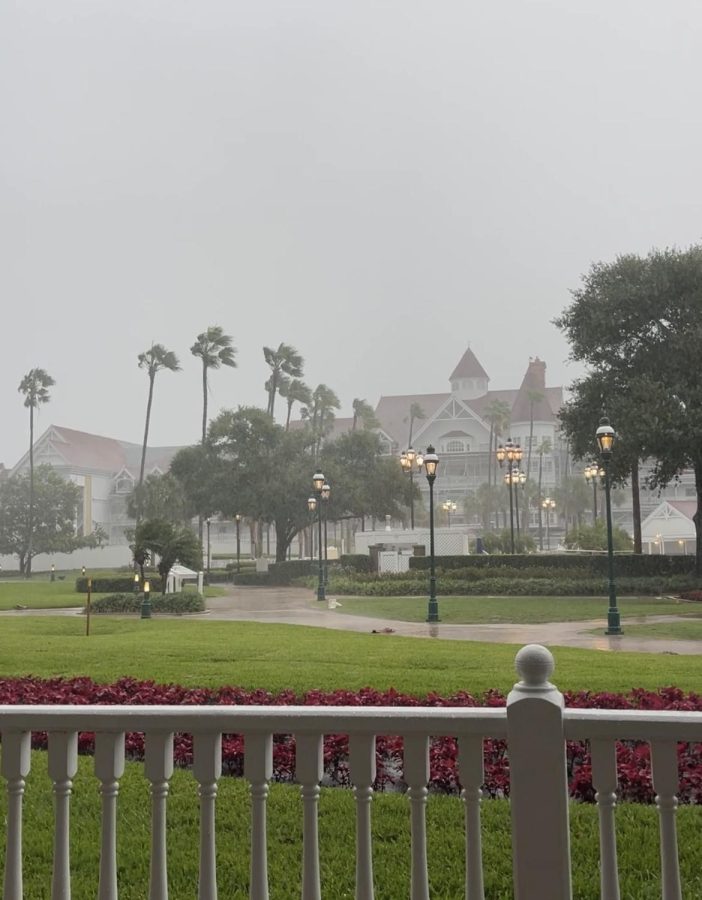 Gallery|6 Photos
As the storm loomed closer towards Central Florida, wind and rain drastically increased throughout the day. The grey skies mirrored guests’ feelings of uncertainty and wariness about the impact of the storm.
Leave a Comment