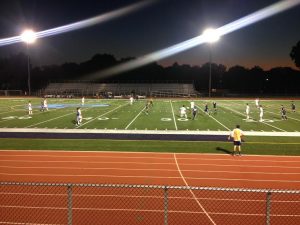 Boys’ soccer lost to Conant 2-0 Wednesday night. Things are not off to a great start with this being their first conference game, and their record is only at 1-3.

“We [were] playing kickball instead of passing to feet,” senior Bryan Velazquez said.

The team attributes a part of their losses so far to their lack of four very important starters. Seniors Ian Lenke, Alex Whiteman, Dominic Taldone and junior Dan Marshall are out due to injuries, and should all be back within one week to a month.

On the other hand, senior goalie Peter Flynn believes the team should be up to regular standard even while missing some key players.

“It shouldn’t make a difference [that we are lacking players],” Flynn said. “We should be playing to our full potential no matter what.”

Nonetheless, the team has been struggling to keep the ball in sight and in control. One of those very struggles was the attempt to secure the ball on the other side of the field. Because Marshall is usually in control of the back line, the Knights’ defense was not up to their usual standard.

As a result, Flynn was able to save many of the shots that were being fired right at him: except for two.

The 10 players that were supposed to be helping him out were just simply not there in front of him.

“I was just wondering [where they were],” Flynn said.

“If one of us falls out of position that throws all of us off and they just happened to capitalize us on it,”  Velazquez said.

Not only was their poor defense from the Knights, but offense lacked some formality whilst handling the ball.

“It just comes down to technical work,” Velazquez said. “If you’re not doing it game-speed in practice then that is how you will do it in the game because you’re not getting any better. Some of us just fall under pressure.”

However, Velazquez believes once the entire team is back together, their overall playing strategy should improve. He also adds that there is a different reason why they have not been successful in the past few games.

“None of the teams have outplayed us [so far],” Velazquez said. “It’s mostly been our fault. Like Cohen says, it’s not about who does it better it’s about who capitalizes on each other’s mistakes.”

This advice has come from their new head coach, Jason Cohen. Now, they are also having to get used to a new coaching strategy.

“[Cohen] wants everything to the books: straight and simple,” Velazquez said. “He’s not afraid of tearing you a new one. He just wants to win.”

Boys’ soccer is now looking forward to a game at Downers Grove North at 10 a.m. this Saturday, Sept. 6.