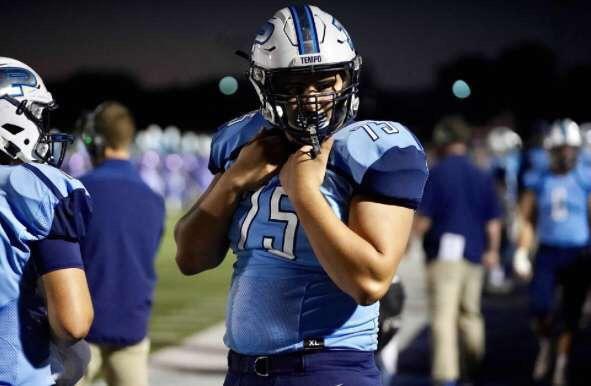 Offensive Lineman Named to Team of the Week

Deboeuf and Sahakian had never met before this, Sahakian didn’t even know who Deboeuf was at the time, but Deboeuf saw his massive stature and obvious athleticism and asked him a simple question: “why don’t you play football?”

A year later, the former saxophone player who had no idea how to set up in an offensive lineman stance, was voted onto Friday Night Drive’s Team of the Week.

“I was shocked to see that, the surprise that hit me was insane and I was ecstatic,” Sahakian said.

Friday Night Drive is a weekly news organization that covers Illinois high school football. Each week they send a ballot out to readers to vote on which players make their weekly team.

After seeing that their lineman was up for voting, the whole team pitched in and even voted more than once to give Sahakian the recognition he deserves.

“It’s great when you know you have teammates you can count on,” Sahakian said, “those guys are like brothers to me.”

The work Sahakian put in to this season is what he feels garnered him a spot on the team of the week. He and the rest of the team have spent hours training in the weight room every day since Thanksgiving of 2018.

Sahakian says that everyone’s weight lifting numbers have increased since then and that the 750 pound club, a lifting club for those who have a combined maximum lift of 750 pounds in bench and squat, has doubled in membership.

However, Sahakian gives most of the praise to his coaches rather than his work ethic. He stated numerous times how thankful he is for his coaches, specifically Deboeuf and offensive line coach Tim Biesher, for giving him the opportunity to play on a team that he has come to love.

“It’s all a blessing and I’m truly grateful,” Sahakian said. “They have been so willing to teach me and have been more than supportive of me.”

Sahakian holds this honor with a lot of personal pride, but moving forward all he cares about now is helping his team achieve a winning season. Sahakian firmly believes that this team can do more and perform better than last year.

“All I want to do is win with my teammates, this year we have all put in the work to win,” Sahakian said.