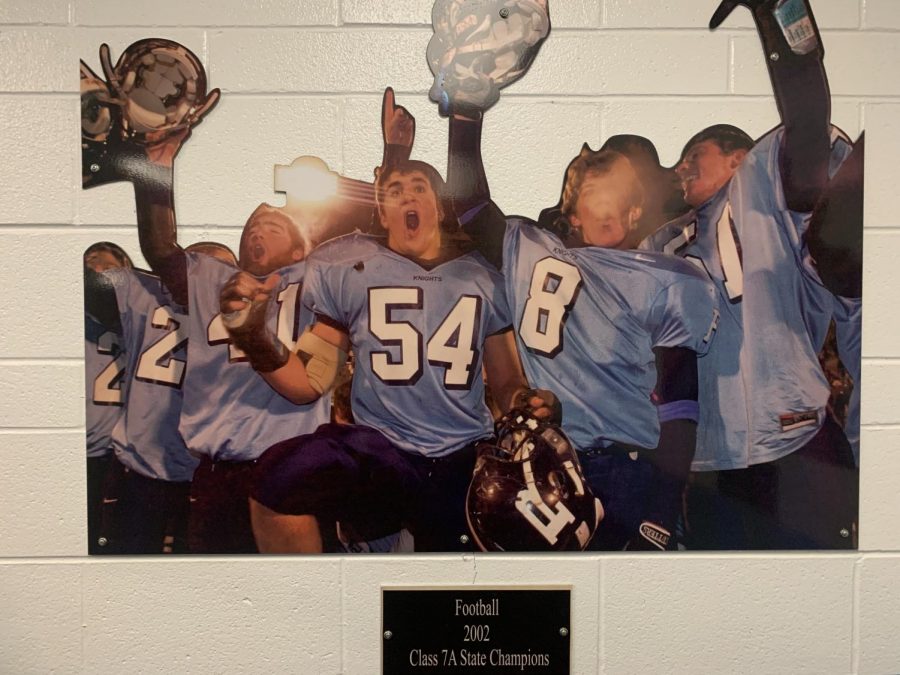 The photo from the 2002 state championship team hangs proudly in the weight room. Before heading to the state championship, the Knights took down the Buffalo Grove Bison in the quarterfinals by a score of 17-16.

A Historic Look at Prospect vs Buffalo Grove

After defeating the Shepard Astros 34-7, the Prospect Knights are set to take on the Buffalo Grove Bison in the second round of the playoffs Saturday, Nov. 6. The Knights got the best of the Bison in a tight 17-14 thriller earlier in the season, but this game goes much deeper than just this second round matchup.

While the last time these two rivals faced off in the playoffs was in 2003, most fans remember their 2002 battle in the quarterfinal. During that season the Knights were the 7-2 overall two seed and the Bison were the undefeated one seed. In their regular season bout, the Bison took it to the Knights on their own turf, beating them 20-14.

“The regular season game [was huge], because obviously we were the defending state champions at that point, and they … were good, [the game] was at home for us and drew like 7,000 people,” current Prospect football coach and former defensive lineman Brock Collins said. “They ended up beating us in a close game … and so then, you know, we got a second chance at them in the quarterfinals that year.”

The Knights would end up beating the Bison 17-16 in a game that went down to the wire and down in Prospect history. The events that took place with 1:05 left on the Prospect one yard line are still hung in folklore and talked about in bars and classrooms to this day. Buffalo Grove had driven down the field in overwhelming fashion, gashing the Knights for 10 yards at a time with their fullback. Soon Buffalo Grove was only a yard away from most likely ending the Knights season.

“I was not on the field for most of that [game] as there was a senior kid who played in front of me, but when they got down to the goal line, they sent me in,” Collins said. “ … They run me on the field and I’m just thinking I gotta try to take people’s legs out … when you’re an interior [defensive lineman] you’re thinking ‘I’m just gonna cause a pile.’”

The Bison ran a quarterback sneak with Tom Zbikowksi but as soon as he took the snap Zbikowksi was drilled by Paul Johannsen and the ball came free. Prospect’s Scott Sprague dove on the ball and the Knights stormed off the field in celebration. Buffalo Grove was speechless.

“From my perspective, I was probably the last person in the stadium to know that had happened,” Collins said. “Because I just like I said, more or less tried to cause a pile and so I heard a huge cheer from the crowd and I’m like oh man, they probably scored and then I stand up and I look at their sideline first and I’m like, no, wait, hold on. We’re cheering and then I see our guys with the ball and I’m like, oh my god. I went crazy after that.”

The Knights would go on to run clock until they eventually took a safety with little to no time remaining, making the score 17-16. The Bison attempted a “Hail Mary” once they got the ball back, but it didn’t come to fruition as the Knights handed the undefeated Bison their first loss. The rest is history as Prospect beat Lake Zurich in the semi-final 41-18 and went on to etch their name in IHSA history beating Edwardsville 24-7.

“They might have [had] some better individuals, but we were a better team,” Associate Principal and former coach Frank Mirandola said. “And I think kind of what you saw at that game is that it was a great Prospect football team, where guys were making plays on the field offensively and defensively and just making plays when it mattered.”

There was one big aspect about that 2002 team that Mirandola noticed.

Even with all the high stakes similarities in their upcoming matchup, Collins really doesn’t see much of a comparison between the 2002 matchup and the second round bout this Saturday.

“I think the only comparison is that it’s the same schools, and that’s pretty much where it ends,” Collins said.

He did mention one similarity which is the Bison running a similar run heavy offense. However, there is one big thing about this current Knights team that Collins pointed out.

“[The team] has had such growth throughout the season and that’s really what it’s about,” Collins said.

It was a trip down memory lane for Collins but he is just more focused on the task at hand.

“I’ve just been trying to do everything I can do to try to put those kids in the best position to go out and win and earn another week,” Collins said.

For almost 19 years the 2002 Prospect vs Buffalo Grove quarterfinal has been argued and discussed across the MSL.  So, it’s only intriguing to see how history will treat this next matchup between these two storied teams.