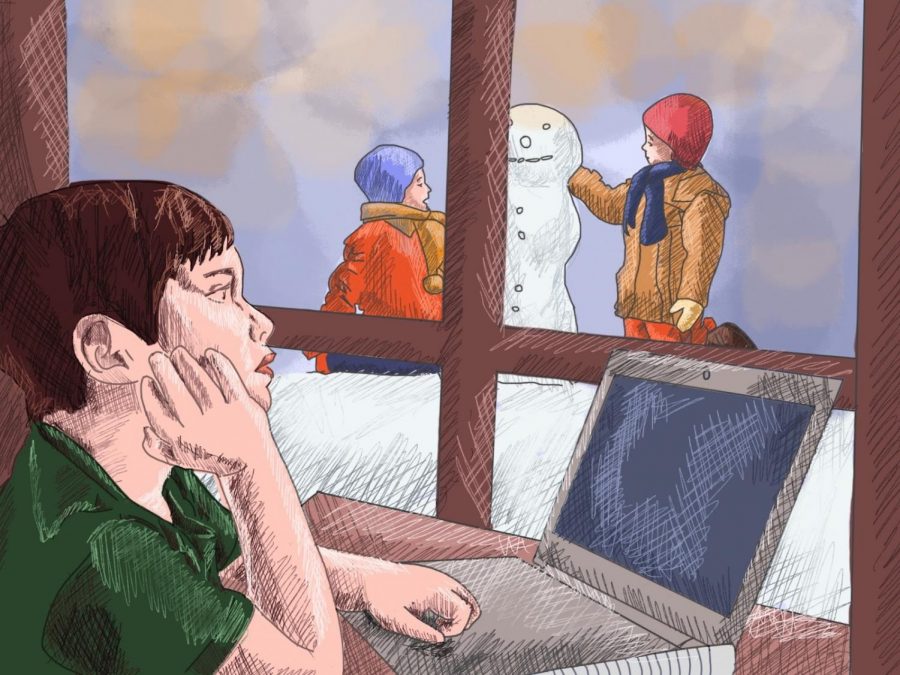 The return back to school the Monday after Thanksgiving Break, a time period of relaxation and rejuvenation, is usually dreaded by most students. However, this dread was quickly wiped away once junior Giselle Salom Hamwi, in eighth grade at the time, learned that Lincoln Middle School would be having a snow day due to extreme snowfall.

And then the following morning, school was canceled for the second day in a row, this time due to electricity issues.

“I remember being excited when my parents received a call, and then rushing to make plans with my friends,” Hamwi said.

That feeling of excitement is one that has the possibility of being brought back to life because of District 214’s decision to keep snow days for the 2021-22 school year, rather than have a remote learning day in their place. District 57, however, is still in the process of deciding what to do on this matter.

According to D214 Superintendent David Schuler, the decision to not have remote learning days was made within the district around the beginning of the school year.

“I think where everybody is at right now, taking a break from time to time is very positive from a social, emotional and cognitive growth perspective,” Schuler said.

There are four days that have been built in to the calendar in case this happens, and, if there is a period of bad weather, like a polar vortex, where the four days would be exceeded, Schuler said D214 would need to work with the Teachers Association to decide whether to extend the school year or to have a remote day.

Undecided on this matter, D57 Superintendent Mary Gorr said her district is putting together a presentation for a public hearing on the proposal for having a remote learning snow day, which is a required step in getting approval from the State on this decision. If D57 were to receive this approval for remote learning days, it would last for five years, Gorr said.

While this does not mean they will be using remote days in place of snow days, Gorr said they would like that option to be available because of the flexibility it offers. If students were to join school remotely on an emergency closure day, it would count as a normal attendance day.

Although, before anything is decided, she wants to hear community input on the topic.

“I know we have some families who feel like, ‘I never want my child to learn remotely again’ for the rest of their school experience, and we can understand,” Gorr said. “We have others who loved it and felt like, ‘we never want remote learning to go away’ because it was a great fit for their kids.”

Even though the idea of a remote learning day was already in the works for D214 and other surrounding districts before the pandemic, D57 had not previously considered the option. Gorr believes that the COVID-19 pandemic and its forced school closures have now shifted the conversations around remote learning.

“I do think [the pandemic] changed the way that we perceive the value of learning that can happen at home,” Gorr said. “I think we’re much more aware of the potential benefits, but also the potential limitations and negative side.”

Gorr feels that opinions towards snow days are situational for every family.

“I am aware that there are families who feel that a good old fashioned snow day is just a great day to be together as a family and kind of celebrate the fact that the weather [has] created a phenomenon that kids are home together,” Gorr said. “We also do hear from a lot of our families who work full time, and unexpected school closures can cause a lot of stress for families who are not able to create childcare situations for their kids at the last minute.”

“There’s nostalgia about snow days,” Gorr said. “When I was little, you know, we always had snow days and it just was something that people came to expect that [is] going to happen, but I do think there’s gonna be a wide variety of opinions [after the pandemic].”

Physical Education and Health teacher Christen Sprenger, who is in support of having traditional snow days, shares Gorr’s reminiscence, and feels like she had more snow days as a kid.

Before the widespread use of the internet, teachers used to have a phone tree for emergency closure days, Sprenger said. The phone tree was a sheet of paper with a list of all of the teacher’s phone numbers, and each person would call the person listed below them to inform them of the emergency closing day.

“Now it’s just an automatic call, but it was always fun to be like, OK , have your phone trees out,” Sprenger said. “I think we got more excited than the students when it came to, you know, oh my gosh, it’s a snow day.”

Sprenger has two children: a six-year-old daughter, and an eight-year-old son that has special needs. While she doesn’t worry about remote learning for her daughter, she does worry if her son would have the motivation to learn in front of a screen again.

“I want [my kids] to get that excitement of being outside,” Sprenger said. “Just because, you know, you’re looking at an iPad, you look out the window, and you know what you can be doing outside.”

Hamwi feels that the mental break of a snow day gives her something to look forward to.

“Whenever it was winter time, you know, you’d automatically think, oh my god, I can’t wait until it snows,” Hamwi said.

She also has a sister who is in seventh grade at Lincoln, and worries for the potential of her not getting snow days.

“When I was a child, I thought of snow days being like the best times of my life,” Hamwi said. “However, when these D57 kids grow up and think back to snow days, they’re just going to think back to when they were stuck at home and COVID was at its worst. So, snow days to them, [are] just going to have a really negative connotation.”

She would rather her sister have snow days than herself because of how younger kids tend to take things more seriously, as they are less mature.

“[Snow days] would make middle schoolers happier than high schoolers,” Hamwi said. “We’re just like, oh, it’s another snow day, but for kids, it’s like, oh my god, we don’t have school, like we get to hang out with friends. But, high schoolers are able to stay out [later], so it’s not as big of a deal.”

In the age of countless amounts of technology and accessibility, Schuler doesn’t see any issues arising with taking a day off from school for the weather.

“I think we believe very strongly in the talents of our instructional staff and our teachers, and in our students,” Schuler said. “And so one day, I don’t see that as having a significant impact as relates to a snow day.”