In a year with the launch of BeReal, Lea Michele making an unexpected resurgence on our Twitter feeds and Tom Brady “retiring” (and unretiring), I’m pretty confident that M&M rebranding didn’t make most people’s 2022 bingo card.

But here we are. With not one M&M rebranding, but two.

On Jan. 20, the original six M&Ms received a cosmetic overhaul (you could say they really shoe-k it up!) to “create a world where everyone feels they belong,” according to Mars. 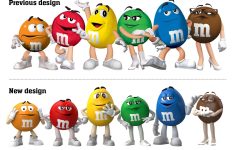 More recently, a statement from Mars on Sept. 28 said that the Purple M&M has officially been introduced into the spokescandy lineup along with OGs: Red, Yellow, Orange, Brown, Green and Blue. Purple is M&M’s next attempt at inclusion, meant to encourage people to embrace who they are. M&M has changed their candy’s color several times over the years, but Purple is the first new character introduced in more than a decade.

Yep. You heard that right. There’s a new candy character in town. Meet Purple: she’s the first female peanut M&M, her workout routine consists of “running late” and she doesn’t wear stilettos because that wouldn’t be very #relatable or feminist of her.

Prone to embarrassment herself, Purple — sporting the catchphrase “Flawless? How about flaw more?” — is known for giving second chances. Since there are oh-so-many incidents to choose from, it’s hard to pick the most embarrassing one.

“They seem to keep one-upping themselves,” Purple said in a profile with M&M.

Mars, in their press release, said Purple’s “charm and quirky nature” will come from her “keen self-awareness, authenticity and confidence.”

Way to hit the whole individuality schtick on the head, M&M.

Purple doesn’t realize she’s being filmed (aw, she’s just like the rest of us!), as she dances around a stage singing her song about being herself. The lyrics are real bangers with lines like: “Does that sound sorta cheesy?” and “You might say I’m kinda awkward. And hey, I would agree!”

Despite what background vocals Blue and Yellow might sing, it is decidedly not only “sorta” cheesy. It’s Melting Pot cheese fondue levels of cheesy. No, fan of the Green Bay Packers degrees of cheesy. Seriously, the lyrics of this song are the amount of cheesy that would cause a mouse to spontaneously combust with absolute cheese-lust.

But hey, I can’t hate too hard. Purple’s entrance into the music world (looks like there are two Eminems in the biz now) is for the nonprofit Sing for Hope. This organization that aims to utilize the arts to bring connection and hope to people across the world through music. For every stream of the music video, M&M will donate $1, up to $500,000.

Charitable contributions aside, this whole switch-up evokes nothing but the overwhelming urge to scream WHYYYY?!?!? (yes, the screechy amount of “Y”s included) into the abyss.

Well, Purple isn’t necessarily a new phenomenon for M&M. Back in the olden days (aka 1949), Purple was standard until it was replaced by beige. Don’t ask me how the blandest color of mundane desert-ness beat out purple, but the people voted. M&M democracy for all! At last, in 1995, fans — finally coming to their color palette senses — voted to swap the beige lentils for blue ones.

Purple faded into the background, never to be heard of again … until The Purple Renaissance of About Twenty Years Ago. In 2002, Mars added a purple M&Ms to the mix, after a poll from fans found support for the color over aqua and pink. With a 41% majority, Purple was available from August to the end of the year, according to Associated Press.

“We’re very excited about the turnout and consumer involvement with M&Ms,” Masterfoods USA president Paul Michaels told CNN Money in 2002. He said purple won because, “It’s a popular color, it’s a royal color. People love it around the world.”

People around the world loved it so much that the launch of the purple candy only lasted a mere five months. Here we are, twenty years later, only for purple M&Ms to be dusted off and relaunched. Seems a bit insensitive to launch a “royal” colored M&M less than a month after the Queen of England dies, but hey, they didn’t care about insensitivity when they swiped sexy Green away from us either.

“Purple has been in the works for a very long time, for years,” Jane Hwang, Global Vice President of M&M’S told CNN Business. “This was about ensuring that the entire crew, the entire cast of spokescandies, were reflecting the world that we’re living in.”

The world we’re living in is one filled with personified candies with glossy lips and personalities to represent Gen Z’s greatest anxieties, apparently. But so long as they have quirky characterization, we’re all morally in the clear for eating them.

But where can you purchase these delightfully sweet purple treats? Surely they are embellishing packs of M&M, bringing that delicious hodge-podge of bluish red coloring to mouths everywhere. Right?

Yeah, that’s not the case. You can find the Purple M&M for regular purchase … nowhere. Literally, nowhere. For those taste buds that go to bed at night, salivating for the crispy and delicious purple treat — look no further than the deep depth of M&M’s website where you have a plethora of choices (namely, one) which is conveniently the ability to order in bulk.

Never fear those consumers that prefer not to chow down on purple M&Ms by the wagon-full — cherry-picking from limited edition spooky season packages is always a viable backup.

This lack of purchasing options is because Purple is exclusively a spokescandy. At the very least, this fact quells any cannibalism-esque qualms about eating our personified M&M friends.

With the whole shoe debacle (bring back Green’s confidence and go-go boots!) that pigeonholed already flat characters into even flatter stereotypes, at least that redesign came with the consolation prize of an M&M.

This time, not only does Mars’ halfhearted attempt at inclusivity fall short, but there is no snack to soothe away your M&M sorrows. But hey! If you’re in the market for a bland candy that sings, look no further for this non-edible cartoon character galavanting around.