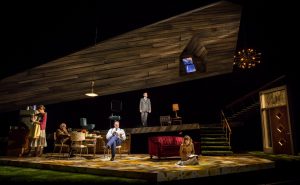 If a great love ends in tragedy, was it still worth it? Noah Haidle’s play Smokefall explores this question and executes it phenomenally.

The play begins with what seems like a typical morning for an average family — Violet, a middle aged woman expecting twin boys, is getting her family — which includes her husband, daughter, and her dementia-ridden father, the colonel, — ready for another day.

But, after a few minutes in, the viewer quickly realizes that something is different about this family. It’s missing love.

Violet and her husband, although at one point had been in head-over-heels love with each other, are no longer the strong couple they once were. In fact, her husband plans to leave her that very morning. This marital discord has taken a great toll on their daughter, Beauty, who hasn’t uttered a single word in years, and has made extreme sacrifices – like eating bark instead of food – in hope that it will help improve her parents’ relationship. This weird trait shows the viewer what impact a loveless environment has on a child really well.

Beauty’s oath of silence is one of many odd quirks in the family. Some of the odd characteristics were risky choices by Haidle, such as when the colonel kissed jis granddaughter, Beauty, mistaking her for his late wife — a scene that made me feel pretty uncomfortable.

But, that bold choice by Haidle was really what put the play over the top — it made the viewer feel the problems in the family.

Perhaps the best part of the play though is a scene that made me laugh until my stomach hurt but also left me teary-eyed. It was about Violet’s twins, Samuel and Johnny, in the womb debating whether or not they want to be born into this tragic family, and Haidle uses just the right amount of comedy to compliment the incredible weight of the topic they discuss. What helped put this cleverly created scene over the top though was the use of sound effects and the set which pulled the viewer in.

Later on, the play shows the family two generations later when Johnny is aged and hasn’t been able to escape the lack of love which has seemed to plague the entire family. Johnny is played by Mike Nussbaum, the same actor that played the colonel, and for some, this five-actor play may get confusing because three of the five actors play are double-casted; however, I thought it perfectly showed the vicious cycle the family could not get out of. The same problems were prevalent generation after generation in this family.

But, Johnny’s son, now full-grown, seems to be determined to break this cycle, which leaves the viewer on an optimistic note.

Overall, these scenes truly touch the viewer and show the importance of love. It was beautifully crafted with just the right amount of tragedy and the enlightenment – to be a devoted daughter like Violet, selfless like Beauty, and determined to find love like Johnny’s son.

The play is a must-see for anyone, and clearly answers my previous question: love anyway.